You may well ask what an Indy bookshop employee was doing trawling through second hand bookshops in Glebe recently (as Mr Books is prone to do with eyebrows raised in askance!)

My only defence as an Indy bookshop employee, is the obvious one - I adore books.

I will always love browsing through over-stacked shelves. Shelves that contain an untold number of hidden potentials and serendipitous finds.

And as an Indy bookshop employee, I now also know which books are difficult to find, expensive or out of print, so if I spot something good I know to grab it then and there!

Which is why on my day off work as an Indy bookseller, I sometimes come home with an armful of second hand books. 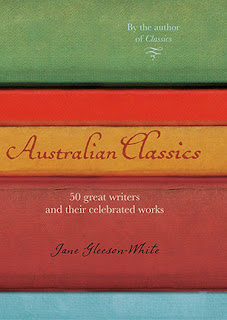 One of the treasures from my recent haul was Australian Classics: 50 Great Writers and Their Celebrated Works by Jane Gleeson-White.

Her aim was to "create a book that would give a broad overview of Australia's writing and bring some its key authors to a wide audience." Gleeson-White felt that


The history of Australian literature is a story of writers attempting to engage with a land they found alien, then claimed and celebrated; of writers engaging with modern Australia's criminal origins and their legacy, as well as the impact of European settlement on Indigenous Australians, their land and culture; and of writers dealing with the fact that Australia's language - English - was imported from elsewhere and that the literary font of this language lies in the green fields, soft light, low skies and delineated social structures of a small island on the other side of the world.


Interspersed amongst her 50 Australian classic stories and poems are lists of favourite Australian novels by well-known contemporary authors and media personalities.

The 50 classics included many of the well-known authors that you would expect to see on this kind of list, but there were several new-to-me discoveries.

I found out where one of my Pop's favourite quotes came from - the poem, Ye Weary Wayfarer by Adam Lindsay Gordon:


Life is mostly froth and bubble,

COURAGE in your own.

I was dismayed to read how many of our early writers died at a young age thanks to alcohol abuse and suicide. And saddened to read that Coonardoo by Katharine Susannah Pritchard as recently as 1929 was the "first novel by a white Australian to attempt to see the world from an Aboriginal point of view."

However the predominant feeling as I read this book was one of pure delight. The joy of reading and discovery and shared love oozed from every page.

I have read (in the order Gleeson-White presented them in her book):

As a classics lover, 14/50 made me blush with embarrassment.

I now have a new reading mission!

To read the other 36 books and poems

There was sooooo much love from all of them for Henry Handel Richardson, Christina Stead, David Malouf, Patrick White, Les Murray, Tim Winton, Kate Grenville and Randolph Stow in particular. I really must try a Patrick White book soon and read one of Helen Garner's fictional works.

Which books or poems have evoked a sense of place and described the Australian experience for me?

In no particular order, I give you Brona's 15 best Australian classics.


The Fortunes of Richard Mahony by Henry Handel Richardson
A Descant for Gossips by Thea Astley
Seven Little Australians by Ethel Turner
Grand Days by Frank Moorhouse
'The Man From Snowy River' by Banjo Paterson (although my teenage love for the Tom Burlinson movie of the same name plays a big role in the addition of this poem into my list!)
Cloudstreet and Dirt Music by Tim Winton
The Great World by David Malouf
Picnic at Hanging Rock by Joan Lindsay
Ash Road by Ivan Southall
Pastures of the Blue Crane by H F Brinsmead
Shark Net by Robert Drewe
The Secret River by Kate Grenville
Sara Dane and I Know My Love by Catherine Gaskin

These are the books and poems that made me love Australia and connected me to country. They opened my eyes to our history, our culture and our environment.