Travels With Herodotus by Ryszard Kapuscinski 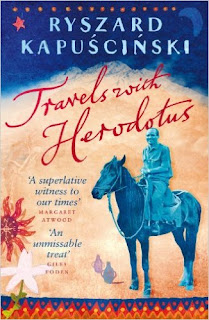 The plan was to reread Herodotus' The Histories in January/February along with Ruth @A Great Book Study.

The reality however, turned out to be a little different.

I knew I was going to be away for most of January, and as much as I wanted to take The Histories with me, I knew I wouldn't be able to do it justice on the road...or so I thought, until I read Travels with Herodotus (2004) by Ryszard Kapuscinski .

Kapuscinski's reminiscences of travelling with Herodotus throughout his extensive journalistic career was not only a great book for me to travel with, it also made me wish that I had actually packed my copy of The Histories.


I was tempted by people still unmet, roads yet untraveled, skies yet unseen.


I first heard about Kapuscinski last year, when one of our regular customers requested a copy of the book. It sounded like my kind of thing, so I ordered a copy for myself as well...and waited for the right time to dip into it.

Kapuscinski reread The Histories so many times during his lifetime, that he became an unofficial Herodotus expert. He quoted excerpts from the book and found that his experiences as a journalist often complemented those of the ancient world.


One must read Herodotus's book - and every great book - repeatedly; with each reading it will reveal another layer, previously overlooked themes, images and meanings. For within every great book there are several others.


As I read Kapuscinski and his excerpts of The Histories, I found myself making connections between what I was experiencing in Cuba and Mexico with what I was reading. I also found myself drawing parallels between the rise & decline of the Persian empire with news coming out of the States.


It seems to be easier to fool a crowd than a single person.

Xerxes is unbalanced, unpredictable, an astonishing bundle of contradictions.


Travels with Herodotus is almost like a Herodotus primer - Kapuscinski discussed who Herodotus was, what his aims were, how he went about gathering his information as well as going over some of the controversies and criticisms surrounding the book and the author's technique.

Memory, perspective and time are themes that both men returned to over and again.


His book is yet another expression of man's struggle against time, against the fragility of memory.


I loved the mix of personal and historical, of current and ancient. Kapuscinski was a thoughtful and thought-provoking writer.


How often do we consider the fact that the treasures and riches of the world were created from time immemorial by slaves?


Like Herodotus, his work was journalistic, anthropological and philosophical in nature.


The present existed always, that history is merely an uninterrupted progression of presents, that what for us are ancient events were for those people who lived them immediate and present reality.


Kapuscinski was a Polish journalist and foreign correspondent post-WWII. He spent time in India, China, Africa & Latin America - and wherever he was posted, he took his copy of The Histories with him. In 1999 he was made 'journalist of the century' in Poland.

Travels with Herodotus was translated by Klara Glowczewska in 2007.
Brona at 30.1.17
Share