A Glass or Two of Negus 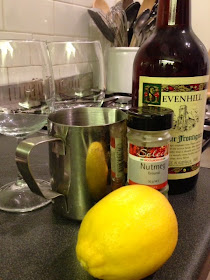 I finished rereading Mansfield Park for Austen in August just before dinner.

I'm not ready to write my post yet, but ever since Wondrous Words Wednesday (see below), I've been tempted by the idea of negus.

I felt that the fitting way to celebrate the end of MP was with a glass of negus!

A google search revealed that it was basically a mulled wine enjoyed at Georgian balls and dinner parties.

The Jane Austen Centre says "Negus, a beverage made of wine, hot water, lemon juice, sugar, and nutmeg was created by by colonel Francis Negus in the early 18th century. Though Col. Negus died in 1737, his namesake drink remained a popular fortifier on cold evenings. During the early Regency it was practically expected, along with White Soup at balls."

Wikipedia also gave me this ... "Negus is referred to in Jane Eyre by Charlotte Brontë, when Jane drinks it on arrival at Thornfield Hall; in Wuthering Heights by Emily Brontë, when Catherine is given it at Thrushcross Grange by the Lintons; in Jane Austen's Mansfield Park; in Charles Dickens' A Christmas Carol during the party at Fezziwig's, in David Copperfield, Dombey and Son, The Pickwick Papers and Bleak House; and in Harriette Wilson's Memoirs. 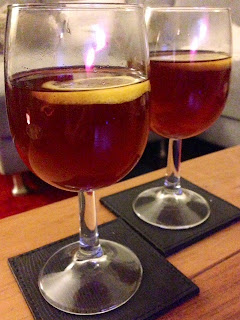 Anthony Trollope in The Small House at Allington portrays the rustic Earl de Guest's violent disgust at the thought of the drink.

Negus makes a number of appearances as a tonic in The Forsyte Saga by John Galsworthy, in Patrick O'Brian's Aubrey-Maturin novels, and Boswell refers to it repeatedly in his London Journal.

It is said to be added to a white soup in P.D. James' Death Comes to Pemberley.

In A Death in the Small Hours by Charles Finch, the character Frederick Ponsonby claims that a glass of hot negus "settles the stomach wonderfully."

In W.M. Thackeray's Vanity Fair, Ensign Stubble "never took his eyes off her except when the negus came in". 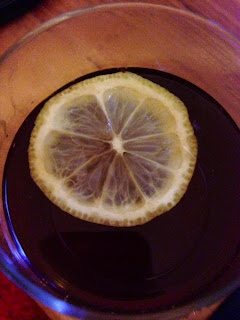 The recipe calls for port or muscat or something similar.

I couldn't come at the idea of adding sugar to a drink that was so sweet already, so I left it out.

The Recipe:
One part port
Half part boiling water
sugar
slice of lemon
nutmeg
(I also added a dash of ground cloves & cinnamon to give it a little extra zing).

We found a 20 year old unopened bottle of Frontignac at the back of the cupboard. With fingers crossed we blended the ingredients.

Even sceptical Mr Books enjoyed his glass of negus.

It was the perfect thing for a cold wintry night.