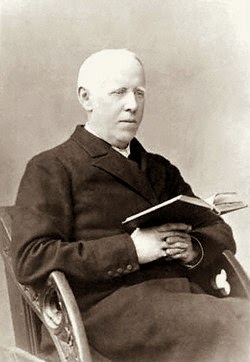 Wikipedia: A spoonerism is an error in speech or deliberate play on words in which corresponding consonants, vowels, or morphemes are switched.

It is named after the Reverend William Archibald Spooner (1844–1930), Warden of New College, Oxford, who was notoriously prone to this mistake.

A spoonerism is also known as a marrowsky, after a Polish count who suffered from the same impediment.

Most spoonerisms were probably never uttered by William Spooner himself, but rather made up by colleagues and students as a pastime.

Over the years I have also become famous amongst my family and friends for accidental spoonerisms.

It started as a child when I used to say "key cars" "web cobbers" and "hanger coats".

During my teen years, a game of tennis with my friends turned into an hysterical laughing session when I "bashed the dayling livelights" out of the ball!
I was also caught making my bed with "double shed beats" and using "oderarm deunderant" after a shower!

I once had a beer at the "Hoach and Courses" (Coach & Horse pub) with my sister's friends "Lunar and Ark" (Arna & Luke). And I have a friend with two boys called "Finn and Qualim" (Quinn and Fehlim).

During my teaching years, I created so many spoonerisms that most have thankfully disappeared into the ether forever.
But my trusty Assistants kept a record of their favourites...!

"Hornamental Oods" when I was trying to explain to a class about the little statues on the front of some cars!
"Stee-bings" (bee-stings) 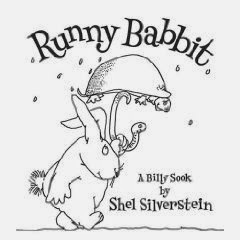 Imagine my delight when I recently discovered that Shel Silverstein has created a book for people like me called Runny Babbit. 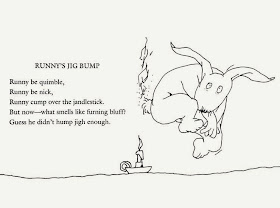 It was a labour of love for Silverstein.

He worked on it for over twenty years & it was eventually published posthumously in 2005.

Silverstein's website says "witty and wondrous, Runny Babbit is a poetry collection of spoonerisms, which twist the tongue and tease the mind!"


Way down in the green woods
Where the animals all play,
They do things and they say things
In a different sort of way –
Instead of sayin’ “purple hat,”
They all say “hurple pat.”
Instead of sayin’ “feed the cat,”
They just say “ceed the fat.”
So if you say, “Let’s bead a rook
That’s billy as can se,”
You’re talkin’ Runny Babbit talk,
Just like mim and he.

As a final aside, 2014 is the 50th anniversary of Shel Silverstein's The Giving Tree. Click here to read my review from a couple of years ago.
Brona at 8.4.14
Share