Under the Net by Iris Murdoch

Hmmmmm, Under the Net by Iris Murdoch...where do I start? 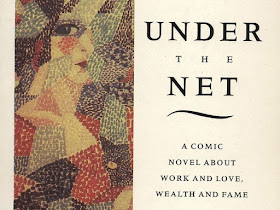 Perhaps I should start with my expectations.

I expected an English-style comedy of errors featuring a bumbling, gentleman layabout.

I'm reading the Random Vintage classic version, so the back cover tells me that,

Jake, clever and lazy, makes a living out of writing translations and sponging off his friends. When he is kicked out of his latest lodgings he embarks on a series of fantastic and hilarious adventures around London involving movie stars, majestic philosophers, bookies, singers and a celebrity hound called the Marvelous Mister Mars. 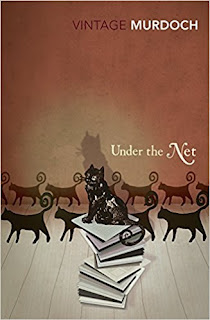 In my mind I pictured Mr Bean, racing madcap around London, bouncing from one person, idea and purpose to the next. Or perhaps purposelessness would be a better term for what Mr Bean does and what I expected from Jake. I fully expected to see a Christmas turkey on Jake's head at some point!

Jake is a particularly English character. He tied himself up in knots of anxiety about his friendships and possible betrayals and all the social niceties that keep the (English) world ticking over. It was exhausting watching him move from one chaotic experience to the next without pause or reflection. Until he had time to pause, then her reflected and reflected and reflected until you could barely recognise the initial problem any longer! And like Jake, you could barely recognise the real person he he was thinking about any longer. Do we ever get to really know the people around us? That's a good question and one that Jake grappled with constantly with little success.

I did struggle around the halfway point to keep going with this story. Jake was annoying me with his bumbling, madcap antics, in pretty much the same way Mr Bean annoys me by the end of an episode. It was getting too ridiculous and silly and pointless!

So I did something I don't normally do.
I read some reviews by other participants of the #IMReadalong and on Goodreads.
They convinced me to persist.

I found myself chuckling about the ridiculous escapade on the fire escape, that quickly led to the bizarre madcap (that word again!) kidnapping of Mister Mars and the eventual fall of Rome!

But what was the point of it all?


One must just blunder on. Truth lies in blundering on.

So we blunder on to the lovely, poignant passage in Paris with Jake chasing his dream of Anna and his work at the hospital back in London where Murdoch finally begins to draw all the loose strings together. The final meeting with Hugo that gives Jake (and us the reader) all sorts of ah-ha moments and understandings were worth the long wait.


What is urgent is not urgent forever but only ephemerally.
All work and all love, the search for wealth and fame, the search for truth, life itself, are made up of moments which pass and become nothing.

Liz's review for Under the Net.
Round Up post by Liz with links to other reviews.


It has taken me two weeks to read this book which gives Under the Net the dubious honour of being my first book finished and reviewed for 2018. But now I get to experience for myself, Jake's emotions as he began Jean Pierre's award winning book,

Starting a novel is opening a door on a misty landscape; you can still see very little but you can smell the earth and feel the wind blowing.