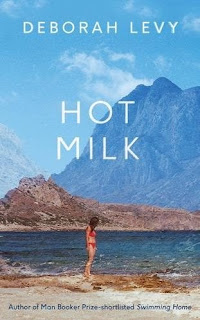 I am proud to say that I managed to read half of this year's Booker shortlist before the winner was announced.

Do Not Say We Have Nothing was an epic multi-generational family saga, His Bloody Project was a psychological historical fiction crime story, but Hot Milk was...?

Two days later, I'm still not sure what it was.

Hot Milk was definitely the one that came from somewhere completely different though.

There was a hint of disquiet - who was watching who and who was studying who? A suggestion of danger or dread hung in the air. Careless actions and hypochondria dripped off every page.

I read some reviews that used the word 'dreamy' to describe the pace of this book as well as the narrator's view of the world, but I found it murkier than that. Fear and pain kept this story going. And hidden selves.

The numerous references to breast feeding and maternal nurturing gave us clues to understanding the title. Mythology and story telling also cropped up as themes. The constant reference to medusa's and their stings, suggested that Levy was playing around with whole worlds of symbolism - a mask, unresolved father issues, female rage, nihilism?

There was probably more going on behind this simple story than first met the eye, but it's wasn't easy to discover. It seemed light weight, but it wasn't.

It's after affects are lingering far longer than a simple story about a mother/daughter holiday in Spain has any right to. Levy carefully kept us off balance all the way through and the climax was worth waiting for. Sort of.

But still I have some doubts...I'm willing to accept that there are layers to be mined, but what's the point?

Have you read any Levy before?
Is this meandering, figurative style how she usually approaches her story-telling?
Brona at 24.10.16
Share