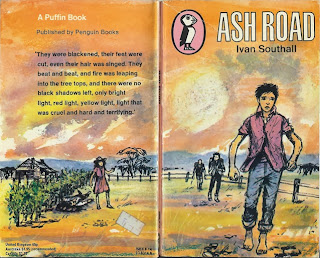 Ivan Southall was one of those authors regularly recommended to me by librarians when I was a child.

I read most of his books during my primary school years and enjoyed them, but I didn't rave about them. They certainly weren't books I returned to read over and over again or books I felt compelled to own.

Having just reread Ash Road for the first time since I was 10, I think I may have been a bit young to fully appreciate this wonderful, horrifying story.

But it seemed like the right time to revisit this book, what with all the bushfires raging around the Blue Mountains, Hawkesbury and Central Coast these past couple of weeks.

Bushfires are such an integral part of our lives in Australia, that even those living in the big cities can be adversely affected by them. Sydney, Melbourne, Canberra, Adelaide & Perth in particular are surrounded by mountains, reserves and 'the bush'. The smoke, the smell and sometimes the ash & flying embers make their presence known right in the city centres.

Debate continues to rage over how much back burning should be done during the cooler months to reduce the intensity of these big blazes.

It was a little disheartening to read in Ash Road, that these issues were being discussed back in 1962 and we don't seem to have moved forward at all.

Ash Road is based on the bushfires in Victoria, January 1962. As with many of Southall's stories, we find a group of children who are left to fend for themselves. They have to work out what's right and what's not. Through adversity they learn about their strengths and weaknesses. For many of the characters, the crisis becomes their rite of passage into adulthood.

Southall's descriptions of the approaching blaze recalls all the horror of someone who's had intimate knowledge with bushfire. Which made me wonder more about his dedication page...

"For years I lived on a long hill on a winding country road. It wasn't called Ash Road - or was it, I wonder? For all I know, it could have been called by that name once.
All the people who lived on that road I called my friends, and I still do; but I have peopled the Ash Road of this story with men and women and boys and girls who live on only in my imagination. They are real in the sense that every character in a story must grow out of people the authors knows or out of himself, but none of them is intended to represent an actual person.
Even Lorna - to whose memory I dedicated Ash Road with love - was another Lorna, a Lorna I knew first in my childhood and lost only a short time ago.
But the event upon which the story is based is not invented. When it started we all knew it had started, and when it ended we could not believe it."

Southall won the CBCA book of the year award in 1966 for Ash Road.
It's an incredibly moving, heart-in-your-mouth, tense story for lovers of realistic fiction everywhere.

Posted by Brona Labels Australian, CBCA, Classic, State by State, VIC at 6.11.13
Email ThisBlogThis!Share to TwitterShare to FacebookShare to Pinterest