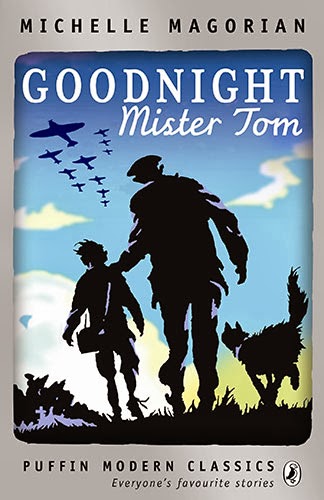 Published in 1981, Magorian's Goodnight Mister Tom is now considered a modern day classic. So much so that Puffin is now including it in their Puffin Modern Classics range.

I was already in highschool (and reading more grown-up books like Flowers in the Attic!) when this book came out, so I missed all the hype surrounding it's early days.

It won the Guardian Children's Fiction Prize and commended by the Carnegie Medal as being the best English language book published in the UK.

Goodnight Mister Tom has since been made into a musical and a TV series.

The story of William Beech, London evacuee, living with a grumpy old man during the early days of WWII is incredibly moving and satisfying.

So many stories from this period focus on the unhappy times that many of the London kids experienced in the countryside.
Magorian took the opposite view with William.

He is an abused child who finally experiences friendship, joy and love whilst living with Mister Tom.

Magorian draws her characters so sweetly that the growth in trust & understanding between them is believable, heart-breaking and ultimately, heart-warming. She chooses an understated way of telling her story, so that you never feel manipulated into an emotional response.

Goodnight Mister Tom is a touching, moving story that would appeal to 10+ mature readers who love historical fiction and a well-told 'real' story.
Posted by Brona Labels Belonging, Classic, Historical Fiction, Identity, War Story at 7.3.14
Email ThisBlogThis!Share to TwitterShare to FacebookShare to Pinterest