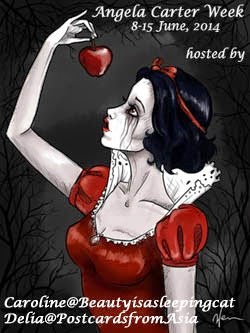 The Courtship of Mr Lyon and The Tiger's Bride are the next two tales in Angela Carter's The Bloody Chamber anthology. These two are based on the fairy tale of Beauty and the Beast.

I was a little let down, but only a little, after the heady, gothic delights of The Bloody Chamber. They seemed less dangerous and therefore, somehow, less delicious.

Beauty and the Beast is a traditional tale that asks questions about our humanity. What are the signs of civilisation? Morality? Good manners?

Mr Lyon is very courteous and generous - providing food, shelter & help to Beauty's father in an Alice in Wonderland (eat me, drink me) kind of way.

When the father steals the white rose and tries to justify his behaviour, it is the Beast who seems more honorable, in my favourite passage of this story... 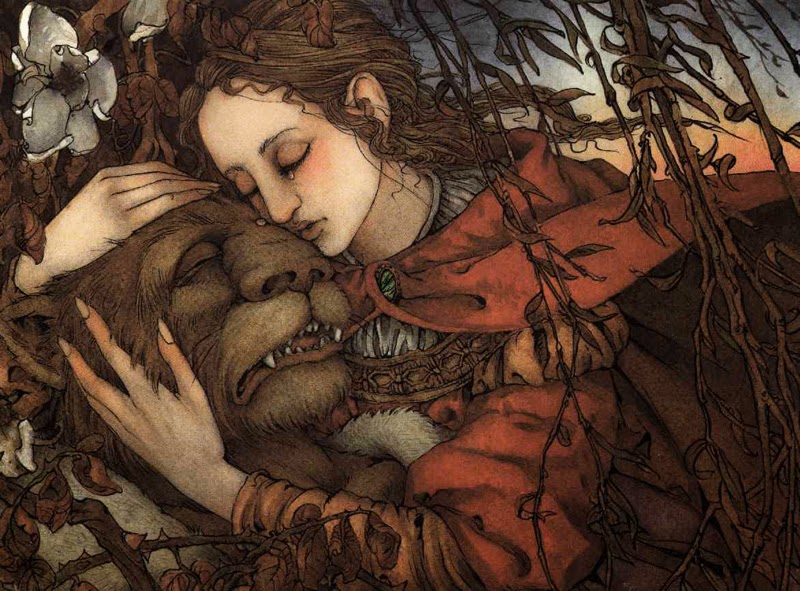 "There is always a dignity about great bulk, an assertiveness, a quality of being more there than most of us are. The being who now confronted Beauty's father seemed to him, in his confusion, vaster than the house he owned, ponderous yet swift, and the moonlight glittered on his great, mazy head of hair, on the eyes green as agate, on the golden hairs of the great paws that grasped his shoulders so that their claws pierced the sheepskin as he shook him like an angry child shakes a doll."

Ultimately, of course, Mr Lyon, the Beast was rescued or transformed by Beauty, which sounds quite traditional and uncontroversial.
It's not until we read its companion story The Tiger's Bride, where it is Beauty transformed or rescued by the Beast, that we see the trademark Carter twist.

The Tiger's Bride is a darker, crueler tale.
The father is a selfish gambler who loses Beauty in a card game.
But the Beast is also more beastly and inhuman in his own right. 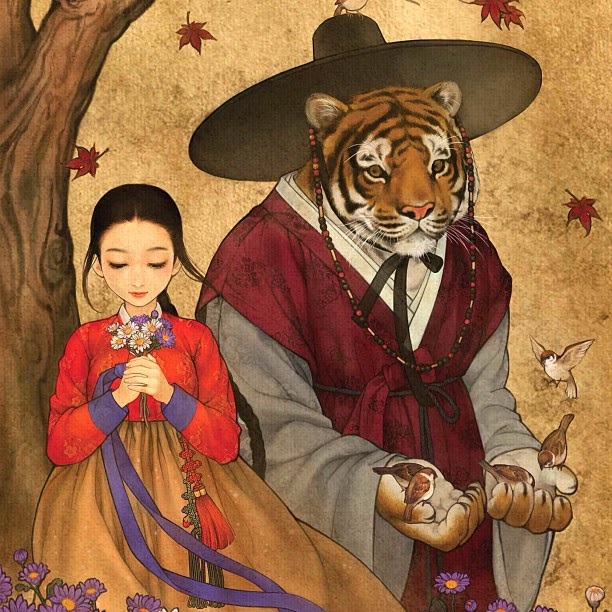 "I never saw a man so big look so two-dimensional."

"only from a distance would you think The Beast not much different from any other man, although he wears a mask with a man's face painted most beautifully on it."

"He wears a wig too, false hair tied at the nape with a bow....And gloves of blond kid that are yet so huge and clumsy they do not seem to cover hands."

"He is a carnival figure made of papier mäché and crëpe hair."

"he has such a growling impediment in his speech that only his valet, who understands him, can interpret for him."

Carter plays with the idea of baring oneself - one's skin, one's heart, one's soul - until, finally, the Beast is unmasked and Beauty is uncloaked. She feels 'flayed', 'stripped' and 'peeled'.

leaving behind  "a nascent patina of shining hairs...my beautiful fur."
Rather satisfying, I have to say!

Puss-in-Boots follows the traditional tale of success and survival of a very cheeky and worldly ginger cat.

Carter's version is a naughty delight from start to finish. 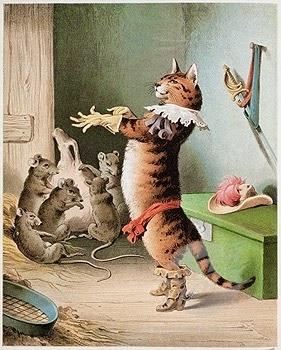 The story is told from Puss' point of view, with saucy humour and savoir faire. Below are two of my favourite quotes to show you how much fun Carter has with the language in this tale...


"I observe with my own eyes the lovely lady's lubbery husband hump off on his horse like a sack of potatoes to rake in his dues."

"they strip each other bare in a twinkling and she falls back on the bed, shows him the target, he displays the dart, scores an instant bullseye. Bravo!"

Carter explores her usual themes of morality and feminism. Adultery, trickery and murder have to be done to achieve this happy ever after. And the happy ending clearly provides all parties with choices in a very un-fairy tale like way...

"So may all your wives, if you need them, be rich and pretty; and all your husbands, if you want them, be young and virile; and all your cats as wily, perspicacious and resourceful as:
PUSS-IN-BOOTS."