Insomniac City by Bill Hayes was my third bloody brilliant book in a row.

I went from the stunning award winning Museum of Modern Love by Australian author Heather Rose to the thought-provoking Exit West by Moshin Hamid to Bill Hayes' beautiful, heart-felt love story about his partner Oliver Sacks and New York City. 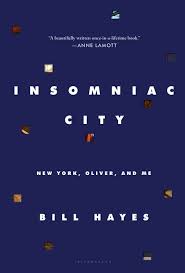 The three books felt interconnected by theme (love, loss and belonging), creativity & art and by my response. All three books stimulated and enticed me to read deeply and thoughtfully.

New York City also played a part in both The Museum of Modern Love and this book, as well as helping me choose my next (and current) read, What I Loved by Siri Hustvedt.

These four books will now be forever linked together in my mind.

My copy of Insomniac City is the rather lush hardback edition with deckled edges. The cover has one of Bill's photographs of the cross street near his home across it, while the dark blue jacket has little windows cut out to see through to the colours underneath. 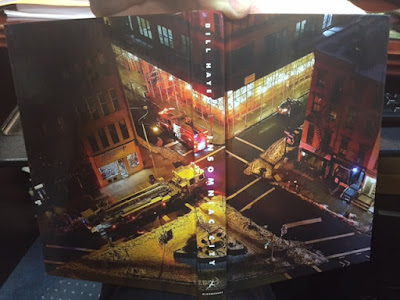 Insomniac City is part memoir, part observation and part journal. Hayes' writing is poetic and mesmerising. His kindness and generosity shines through on every page. I felt inspired by how he could find beauty in everyday life and his power to create a meaningful connection with those around him.

Bill has also littered the pages with many of his New York photographs featured on his Instagram page (found here).

The only problem, however, that I soon discovered with deckled edges, is how hard it is to flick though the pages. I had marked, in pencil, several significant passages and possibilities to include in this post.

The only one I could easily find again was this remark of Oliver's to Bill,


The most we can do is to write - intelligently, creatively, critically, evocatively- about what it is like living in this world at this time.


This is something they both excelled at and something that I aim to do (however imperfectly) here at Brona's Books.

My reading doesn't occur in a vacuum.
It's influenced by what is going on around me as well as inside of me. Sometimes I want an emotional reading experience (happy, sad or anywhere in between) and sometimes I want to be engaged on an intellectual level.

The very best of books do both at the same time.

I have now read three books in a row that do just that.

Bill Hayes is one of the many authors appearing at this year's Sydney Writer's Festival - another reason why I was moved to read this book.
Posted by Brona Labels Art, Diary, Loss, Memoir, New York, Non-Fiction, Relationships at 13.5.17
Email ThisBlogThis!Share to TwitterShare to FacebookShare to Pinterest