I've recently been dipping in and out of Alison Whittaker's book of 'poetry, memoir, reportage, fiction, satire and critique', Blakwork. It's beautiful, confronting and unflinching. 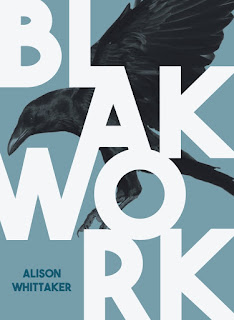 But I keep returning to one poem, perhaps because of the link to an older poem that is part of my white heritage. The comparison and contrast between the two ideas and images challenges many of my preconceived beliefs. I'm trying to understand; I want to understand, but sometimes the gulf still feels too huge. A Love Like Dorothea's helps to narrow that gulf a little for me.

I found Whittaker's reading below on the Melbourne Visiting Poets Program, at The Wheeler Centre in August 2018. They tell us that,

Alison Whittaker is a Gomeroi poet, life writer and essayist from Gunnedah and Tamworth, north-western New South Wales. She now lives in Sydney on Wangal land, and is recently returned from the US, where she received a 2017 Fulbright Indigenous Postgraduate Scholarship to complete a Master of Laws (LLM) at Harvard. Her poem MANY GIRLS WHITE LINEN received the Judith Wright Poetry Prize in 2017. She is the author of Lemons in the Chicken Wire (Magabala Books), the debut collection that established her as a powerful new voice in poetry.


For more information about Whittaker and her poems I suggest you read Jeanine Leane's Ultima Thume article in The Sydney Review of Books from February 2019 and Laniyuk's March 2019 review in The Lifted Brow.

Jennifer @Holds Upon Happiness posts a lovely Poem for a Thursday each week. I'm enjoying sourcing poems from my recent reads to join in with her as I can.
Posted by Brona Labels 2018, A Poem for a Thursday, Aust Women Writers, Indigenous, Poetry, Spoken Word at 23.5.19
Email ThisBlogThis!Share to TwitterShare to FacebookShare to Pinterest