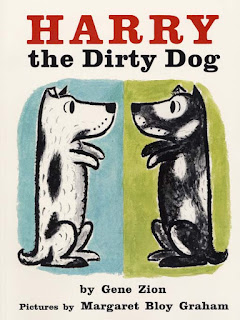 Harry the Dirty Dog was first published in 1956.

Since then so much has been said about it, so much love has been sent its way, and so many accolades and awards have been heaped upon it that I'm not really sure what I can add!

So I give you my own journey with this book.
Sadly, I never knew this book as a child.

I discovered Harry the Dirty Dog by accident when I began my teaching career.
My assistant kept putting it on our class library shelf; I kept packing it away. It looked too old fashioned and dated. Until one rainy day I overheard her reading the book aloud to a group of (mesmerised) children.

From then on I was a convert.

I read Harry to all my classes within the first month of a new school year. Most years it became a firm favourite with the class - which meant reading it over and over again to individuals, small groups and large throughout the rest of the year.

Twenty years later, Harry the Dirty Dog has not lost any of his appeal.
I still delight in reading it out loud to groups of children. And the children still love Harry. I love watching their faces light up as I hook yet another group of three & four year olds with Harry's charming antics.
Over the years Harry has sparked all sorts of conversations about identity, running away from home, being naughty, cleanliness and the joys of getting muddy!
The original black and white illustrations by Margaret Bloy Graham (Zion's wife from 1948 to 1968) also created lots of discussion as modern children tried to come to terms with 'old fashioned' drawing techniques and styles.

In 2002 Graham added splashes of colour to her original drawings which confounded the speculations I had had with my classes that the illustrator meant the pictures to be black & white as part of the artistic integrity of the story!! 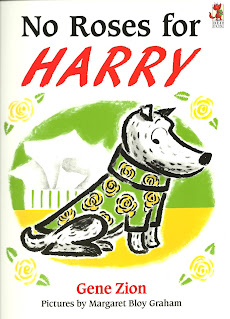 Our love for Harry always led us onto No Roses For Harry.

No Roses for Harry was published in 1958 and in some ways has dated a little more than the original. Maybe it's the Queen-like Grandma with her afternoon nap?
However, the unwanted gift scenario always strikes a chord with young children and Harry's lucky way of solving his problem delights everyone - including Grandma! 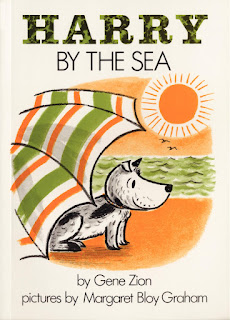 Harry By the Sea (published in 1965) however, never quite worked for us.
Over the years we would read all three books, but Harry By the Sea never became a class favourite. We would all chuckle at the scary sea-monster, but the resolution lacked the satisfying zing of the other two books.

After their divorce in 1968, Zion stopped writing and died in 1975. Margaret continued to illustrate books (winning two Caldecott medals during her career), remarried and as far as I can ascertain, is still living in Toronto.

It's hard to believe that Harry is now 56 years old.

Age has not wearied him; his personal dilemma's still speak to the children of today.

He regularly appears in Top 100 lists compiled by teachers, librarians and parents around the world.

Harry is not old - he is a classic!
2020 update:
Betty White reads Harry the Dirty Dog
Posted by Brona Labels 1956, Classic, Identity, Picture Book, Problem Solving at 25.9.12
Email ThisBlogThis!Share to TwitterShare to FacebookShare to Pinterest