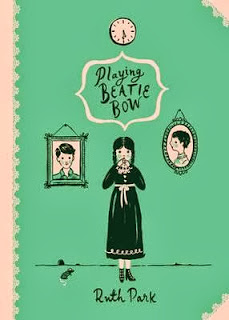 It won the CBCA award for older readers back in 1981.

Ruth Park wrote novels for adults and children. She was born in New Zealand but moved to Australia when she was 25. She married Australian author, D'Arcy Niland (who wrote The Shiralee) and had 5 children. Her youngest daughters were twins, Kilmeny and Deborah, who became well respected illustrators for children's books.

Playing Beatie Bow is set in Sydney in modern times. Abigail is facing all sorts of family upheavals and spends a lot of time wandering around her local area of the Rocks to avoid the tension at home. A bizarre meeting with a young (lost) girl called Beatie Bow causes Abigail to travel back in time to 1873.

Park provides an evocative and memorable journey around the streets and slums of colonial Sydney as Abigail tries to find her way home again.

Curiously, to the 21st century reader, it's the scenes set in 1980's Sydney that jar the most. They sound dated and almost cringe-worthy. Or maybe that's just me - since I was also an out-of-place teenager in the '80's!