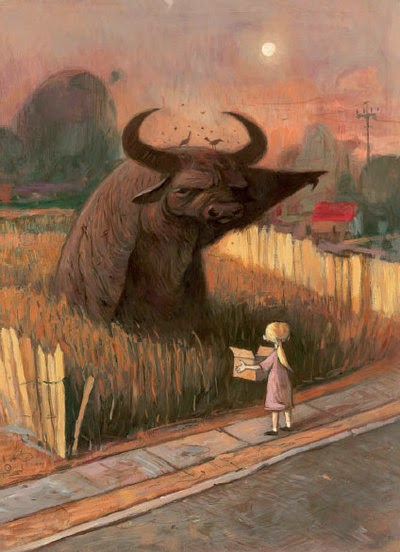 Shaun Tan is an award winning Australian writer and illustrator (click on the link to visit his blog).

In 2011 he won the Astrid Lindgren Memorial Award (ALMA) - the second Aussie to win since its inauguration in 2002. The judges comments stated that:

Shaun Tan is a masterly visual storyteller, pointing the way ahead to new possibilities for picture books. His pictorial worlds constitute a separate universe where nothing is self-evident and anything is possible. Memories of childhood and adolescence are fixed reference points, but the pictorial narrative is universal and touches everyone, regardless of age.
Behind a wealth of minutely detailed pictures, where civilization is criticized and history depicted through symbolism, there is a palpable warmth. People are always present, and Shaun Tan portrays both our searching and our alienation. He combines brilliant, magical narrative skill with deep humanism.
Over the years I've read a number of his books.
Each rereading shows me something new, reveals another layer and quite simply confounds me even more!

Tan's illustrations are dream-like, surreal and absurd yet somehow familiar. Every [age and every illustration is loaded with detail - they can be pored over for hours and still not reveal their all. 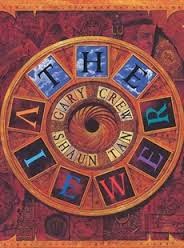 His stories & illustrations share the themes of loss, belonging and natural justice.

Below are the Shaun Tan books I've had an opportunity to read.
Tan's early works were usually collaborations, but his later books were written and illustrated by Tan alone.

The Viewer was published in 1997 - illustrated by Tan and written by Gary Crew.

Crew and Tan collaborated extensively during the creation of this book.
They share a love of horror, science fiction and humour.

The Viewer focuses on the topic of time, change and history. The illustrations are in the form of an old viewing box disc - you know the ones - you put the disc with tiny negatives into a viewer and you look through the lens and turn the disc to see the images. The cover of the book (above) gives you the idea anyway. 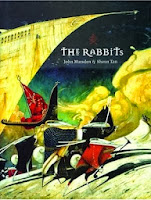 The Rabbits is regularly used in primary schools.
Sometimes the bleakness and harshness of the message is hard to take - "who will save us from the rabbits? But I can see how teachers would thrive on the discussions this question raises - what can we do to save us? How can we change? 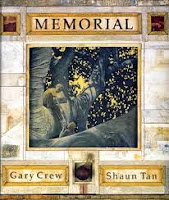 The Rabbits won the CBCA picture book award for 1999.


In 1999, Tan teamed up with Crew again to create Memorial - a poignant story with big themes - remembrance, war, the passing of time and "living memorials". But it is the quieter, everyday memories and conversations of the family involved that go to the heart of the story. 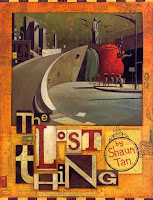 The Lost Thing (2000) is another book regularly selected by primary school teachers to highlight the themes of belonging and identity. It is one of Tan's first books that he wrote and illustrated himself.

He also created an animated short film from this book in 2010 which won an Academy Award for Best Animated Short.


There is a hopefulness in The Lost Thing that can be hard to find in some of the other works.

It's topic is depression, solitude and being alone.

The story and illustrations are drenched in despair and hopelessness, so much so, I often have trouble finishing it.

But each time I'm glad I did because the final page does offer hope and change and a way forward that is not so bleak. 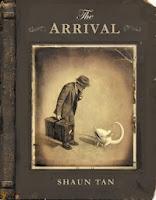 The Arrival (2006) is a wordless picture book of extraordinary complexity.

This time the topics are refugees, emigration and culture. Tan highlights the differences, so that we see the similarities.

The sepia images act like a photo album, creating a sense of history that is both personal but removed in time.

The Arrival is still only available as a hardback book. It also won the CBCA picture book of the year award. 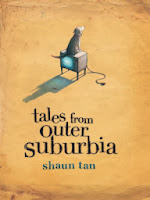 Tales From Outer Suburbia (2008) is a collection of unrelated stories.

This book has the most text of all of Tan's books - it reads like a short story chapter book with plenty of intriguing, absorbing illustrations, of course!

The most well-known story from this collection is Eric - the curious tale of an exchange student who leaves his host family with an intriguing farewell present. 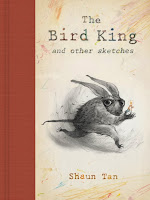 The Bird King and Other Sketches (2011)  is a collection of Tan's scribbles & sketches that he did not originally intend for publication, from the past 12 years.

A brief introduction allows Tan to explain some of his ideas about drawing and creativity.

It's fascinating to see that the third picture in "untold stories" is one of the pages in his latest book The Rules of Summer.

The sketch book also has a number of "drawings from life" that are quite moving in their simplicity and rawness.


The Oopsatoreum: Inventions of Henry A Mintox (2012) was created with The Powerhouse Museum. 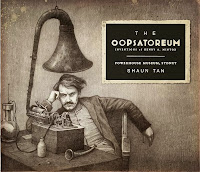 Mintox was considered the "Edison of Australia" - it's just that no-one has ever heard of him!

The Powerhouse has oodles of his inventions in their archives.
He invented a love trumpet, a handshake gauge, mouse slippers to help his wife overcome her fear of mice and the first fat suit! He also designed the first MSM/email prototype complete with a smiley face key (I kid you not!)

Mintox wrote postcards to himself as a way to remember and record his experiments and inventions.
Tan plays around with this idea through his illustrations - injecting humour and modern insight.

Each page also has a photograph supplied by the Powerhouse of the actual invention. 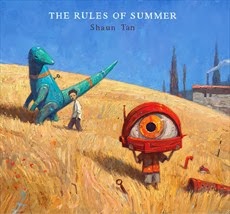 The Rules of Summer (2013) is Tan's latest book. It explores his usual themes but this time via sibling rivalry.

The illustrations in TROS are probably some of Tan's most colourful - a reflection of the summer colours particular to Australia.

However this doesn't stop Tan from heading off into dark territory!

Most of Tan's books have a page or a section that cause me to experience a strong emotional reaction.

TROS is no different - the 3 pages detailing the waiting for an apology bring me undone each time I read it through.

Shaun Tan's work is not for everyone.
Some I know find it too bizarre and too bleak.

I'm not normally someone who embraces the surreal, but Tan's works have crept under my skin over the years.

I think I connect with his sense of aloneness, his search for belonging and meaning and his determination to find hope nonetheless.

Are you a Fan of the Tan? 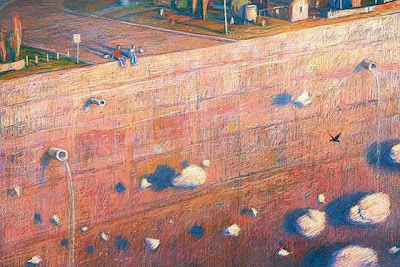