Musings of an Idle Reader

I didn't know I would have to read poems to get through Don Quixote!

I'm not averse to poetry; in fact, I love many, appreciate even more and adore a special few. But I've always struggled when authors insert poems, odes and songs into their work.

The songs throughout The Lord of the Rings bore me to tears and I cannot tell a lie, when I finished the Prologue in Don Quixote and turned the page to start the story proper and saw seven pages of sonnets, I nearly threw the book across the room! 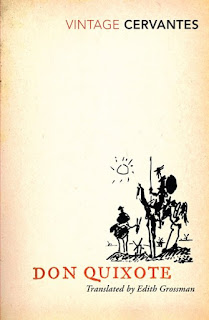 So why do I persist?

Firstly, I've always wanted to read Cervantes 'best work of fiction in the world'*. I knew it would be challenging, so I had to wait until the right time to read it.

That time is now, thanks to Nick @One Catholic Life who is hosting a chapter-a-day readalong of Don Quixote starting on the 1st January 2019.

Secondly, the translator notes in my edition of the book claim that,


Cervantes' book contains within itself, in germ or full-blown, practically every imaginative technique and device used by subsequent fiction writers to engage their readers and construct their works.*


As an avid reader, why wouldn't I want to know more about the story that started it all!
She also enthuses about the writing, 'it gives off sparks and flows like honey.'* Wow, right?

Thirdly, Cervantes himself, in his Prologue, encourages his idle reader to,


say anything you desire about this history without fear that you will be reviled for the bad things or rewarded for the good that you might say about it.


Cervantes wants us to discuss his work, for good or bad.

Fourthly, he's having a cheeky go at us right from the start. He tells us, in his prologue, that he wants to tell a simple 'plain and bare' story,


unadorned by a prologue or the endless catalogue of sonnets, epigrams, and laudatory poems that are usually placed at the beginning of books.


Finally, and most importantly, thanks to Nick & co's support, I will not give up at the first hurdle. I will convert this hiccup into a learning experience instead. Nick has put up his first encouraging #Quixotereadalong post to help those of us wondering why on earth we agreed to do this!

* quotes from the Translator's Notes to the Reader in my 2005 Vintage edition of Don Quixote by Edith Grossman.

So far I have learnt that all these early poems are written by fictional characters to honour Cervantes own fictional character. Urganda the Unrecognised, Amadis of Gaul, Don Bellanis of Greece, Lady Oriana, Gandalin, Squire to Amadis of Gaul, Donoso, an Eclectic Poet, Orlando Furioso, The Knight of Phoebus, Solisdan and Babieca are all literary characters from some of Cervantes favourite chivalric stories.


Amadis the Gaul was first published in Spain in 1508 (author unknown). It is considered to be a 'masterpiece of medieval fantasy. It inspired a century of best-selling sequels in seven languages and changed the way we think about knights, chivalry, damsels in distress, and courtly life in castles.' Amadis the Gaul also has it's very own blog devoted to it here.

Don Belianis of Greece is another chivalric romance novel from Spain, often published in English as The Honour of Chivalry (author unknown).

Orlando Furioso also known as The Frenzy of Orlando, or Raging Roland is an Italian epic poem by Ludovico Ariosto which first appeared in 1516. According to Wikipedia, it is a poem 'about war and love and the romantic ideal of chivalry. It mixes realism and fantasy, humour and tragedy.'

The first poem is from Urganda the Unrecognised:


a personage in Amadis of Gaul somewhat akin to Morgan la Fay and Vivien in the Arthur legend, though the part she plays is more like that of Merlin. She derived her title from the faculty which, like Merlin, she possessed of changing her form and appearance at will. The verses are assigned to her probably because she was the adviser of Amadis.

He also believes all the poems:


should he preserved—not for their poetical merits, which are of the slenderest sort, but because, being burlesques on the pompous, extravagant, laudatory verses usually prefixed to books in the time of Cervantes, they are in harmony with the aim and purpose of the work, and also a fulfilment of the promise held out in the Preface.


Do you know what 'versos de cabo rato' are? I do!
The first poem from Urganda is written in this form, where the final syllable is missing from the end of the each line. I believe the point is humour!
There are various online forums (especially in Spanish) devoted to creating the endings for this poem if you dare. 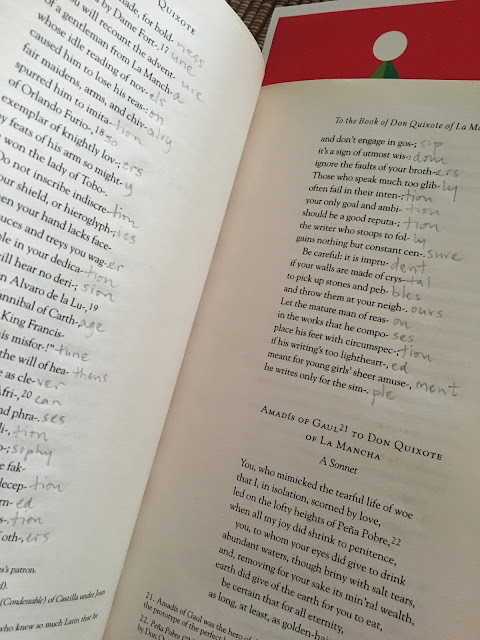 Cervantes doesn't believe that poetry should be limited to the humans in his story either. The faithful horses also get a chance to honour each other. Babieca was the steed of real-life, folk-hero El Cid and from him we learn that Don Quixote and his steed, Rocinante will probably spend most of the story being hungry.

So now that we've got that hurdle out of the way, it's time to jump into this picaresque, road-trip novel proper. Let the journey begin.
Posted by Brona Labels 1605, Adventure, Chivalry, Classic, Picaresque, Poetry, QuixoteReadalong, Readalong, Road Trip, Spain, Translation at 3.1.19
Email ThisBlogThis!Share to TwitterShare to FacebookShare to Pinterest