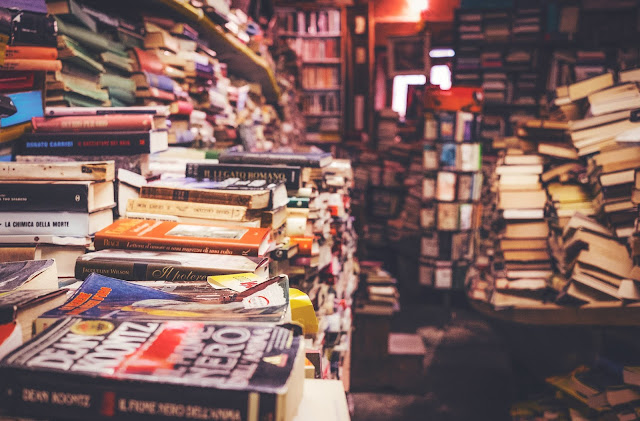 I don't know why I'm doing this to myself, but to reduce the risk of buying books I already own, but still haven't read, I thought I should list all the unread, non-classic books on my shelves and lurking under my bed.

My classic books already have their very own lists on here, and this system will work fine as long as I remember what I classify as a classic and what I don't!

Fathoms: The World in the Whale by Rebecca Giggs
The First Book of Samuel by Ursula Dubosarsky
Fire Country by Victor Steffensen
A First Place by David Malouf
Flames by Robbie Arnott
From the Edge by Mark McKenna

A History of Books by Gerard Murnane
Home by Larissa Behrendt

Landscape of Farewell by Alex Miller
Longlegs by Glenda Adams

A New England Affair by Steven Carroll
No Friend But the Mountain by Behrouz Boochani
Not Drowning, Reading by Andrew Relph
Notebooks by Betty Churcher

The Old Lie by Claire G. Coleman
Omega Park by Amy Barker
Only in New York by Lily Brett
Origin Story: A Big History of Everything by David Christian

Sagaland by Richard Fidler and Kari Gislason
Shallows by Tim Winton
She I Dare Not Name by Donna Ward
The Shelf Life of Zora Cross by Cathy Perkins
Shell by Kristina Olsson
The Shepherd's Hut by Tim Winton
A Single Tree by Don Watson
The Slow Natives by Thea Astley
Songlines: Tracking the Seven Sisters by Margot Neale
The Songlines by Bruce Chatwin
The Spare Room by Helen Garner
Stasiland by Anna Funder
Stories by Helen Garner
The Swan Book by Alexis Wright
Sydney Harbour: A History by Ian Hoskins

You Daughters of Freedom by Claire Wright

Offshore by Penelope Fitzgerald
Olive, Again by Elizabeth Strout
On the Black Hill by Bruce Chatwin
One Morning Like a Bird by Andrew Miller
The Only Story by Julian Barnes
The Overstory by Richard Powers

The Year Without Summer | Guinevere Glasfurd

On the Line | Joseph Ponthus

The Flaneur by Edmund White
Footprints: In Search of Future Fossils by David Farmer
The French Revolution by Thomas Carlyle

Imagining London | Anna Quindlen
In the Garden of Beasts | Erik Larson
In the Heart of the Sea | Nathaniel Philbrick
Katherine Mansfield: A Secret Life | Claire Tomalin

M Train by Patti Smith
Magic Island: The Fictions of L M Montgomery by Elizabeth Waterson
Men We Reaped by Jesmyn Ward
A Month in Siena by Hisham Matar
Mythos by Stephen Fry

October by China Mieville
On the Narrow Road: Journey into a Lost Japan by Lesley Downer
On Writing by Stephen King
Origins by Amin Maalouf

Salt Fat Acid Heat by Samin Nosrat
Sapiens by Yuval Noah Harari
Second Nature by Michael Pollan
The Secret Life of Cows by Rosamund Young
The Shepherd's Life by James Rebanks
A Short History of Europe by Simon Jenkins
Short Nights of the Shadow Catcher by Timothy Egan
The Silk Roads by Peter Frankopan
The Sixth Extinction by Elizabeth Kolbert
Stumbling Stone by Airdre Grant
The Swerve: How the RenaissancGreenblatt

The Wages of Guilt: Memories of War in Germany and Japan by Ian Buruma
The Way Home: Tales From a Life Without Technology by Mark Boyle
What to Do When I'm Gone by Suzy Hopkins & Hallie Bateman
The White Road by Edmund de Waal
Why Read Moby Dick? by Nathaniel Philbrick
Winter Journal by Paul Auster
Women of the Raj by Margaret Macmillan

You're Not Listening by Kate Murphy

YES
I have a problem!
Email ThisBlogThis!Share to TwitterShare to FacebookShare to Pinterest