The Bridge of San Luis Rey by Thornton Wilder 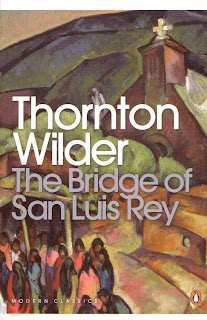 I find that stories set in South America often have a similar tone and style.

Over the years I've read Gabriel Garcia Marquez, Nicholas Shakespeare as well as many historical accounts about the coming of the Spanish.
There is something about this continent and it's writing that both attracts and repels me.

The drama, the pathos and the tragedy is writ large. The clash of culture, religion, ideas and class that somehow melds together to create the chaotic, sprawling, magical world that is South America in literature.

I love these themes, but I often feel detached and unmoved by the writers of South American literature that I've read so far.


These writers seem to be inspired by the mystical, magical and otherworldly nature of South America. Here more than elsewhere are stories of gods and power and hubris.
Perhaps it's the harsh environment - soaring mountains, deadly jungles, flooding rivers, killer animals and extremes in temperature that inspire these artists.
This is not a country for gentle family dramas to unfold at a leisurely pace!


Wilder didnt actually visit Peru úntil 1941, which makes it remarkable how well Wilder conveys the feel of Peru.
The Bridge of San Luis Rey is a slim volume that discusses the big, fat, juicy themes of free will and the meaning of life!
There is a fatal disaster up front.
We know from the beginning that 5 people die for no good reason, with no purpose and unfairly. Brother Juniper, a witness, decides to research the five people killed to see he can resolve the question of whether or not "we live by accident and die by accident, or we live by plan and die by plan."
The book then becomes a conversation with the church and god and self about the value of an individuals life in the larger scheme of things. How does one live with chaos? How does one create a purpose in life? What is the value of a good life if the good and the bad die equally?

The book is littered with beautiful prose and images. My favourite was "There was something in Lima that was wrapped up in yards of violet satin from which protruded a great dropsical head and two fat pearly hands; and that was its archbishop."

The Bridge of San Luis Rey was thought-provoking and beautifully constructed, but I felt alienated the whole time I was reading it. I never really cared for any of the characters or what happened to them. There was a lot of talk of passion but I felt cold.

****This is now my official spoiler alert.
I'm about to quote the final sentence of the book because I loved it so much.
It moved me so much I reread it several times.
It summed up the book perfectly with a lovely piece of imagery.
If you'd like to discover Wilder's gem on your own, then stop reading here.


Posted by Brona Labels Classic, Pulitzer at 16.10.12
Email ThisBlogThis!Share to TwitterShare to FacebookShare to Pinterest