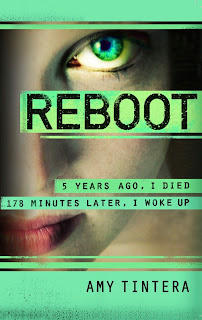 I can't tell you how sceptical I was about this book.

I'm so over teen/YA dystopian stories trying to grab onto the coattails of The Hunger Games. I was disappointed with The 5th Wave, although my husband quite enjoyed it. I therefore took my ARC of Reboot along to my stepson's soccer game with very little joy in my heart.

If not for a very exciting and close game of football, I may have gone close to finishing this book in one sitting. It captured my attention right from the start and kept me hooked all the way through (although the ending was a little soft).

I've been trying to work out why my experiences with Reboot and The 5th Wave were so different.

The writing style appeals to me a little more in Reboot, but it's not that different to The 5th Wave really. I think Tintera writes the female voice far better than Yancey did. They both have strong female characters, but Wren is far more believable and likeable than Cassie.
Perhaps it's the dialogue that reads better in Reboot, or maybe it's the romance that dances around on the sidelines? Do I simply gravitate towards books with more romance rather than more action?

I read The 5th Wave pre-Bali holiday and Reboot post-Bali holiday - could timing and mood be the difference? My husband doesn't think I gave The 5th Wave enough time to grab me before I started skimming it, but I never once felt like skimming ahead in Reboot.

Perhaps it's nothing more mysterious than that magical connection some books and some authors create with some of their readers!

I'll be curious to see how both these books go once they hit the shelves.

Reboot has some mild sexual references and fight scenes.

Reboot is a May release in Australia through Allen and Unwin.

P.S. three weeks later...my husband has now read Reboot and felt it was the better book of the two. We think the relationship between Wren and 22 was one of the key reasons for the books appeal.
Posted by Brona Labels Belonging, Dystopian, Identity, Romance at 18.4.13
Email ThisBlogThis!Share to TwitterShare to FacebookShare to Pinterest