This was my first ever visit to the Sydney Writers Festival.
I had a blast.
My brain went into overdrive thanks to the ideas, the storytelling, the crowds and the gorgeous, gorgeous weather and views.
I was impressed by the diversity and surprised by the crowds. 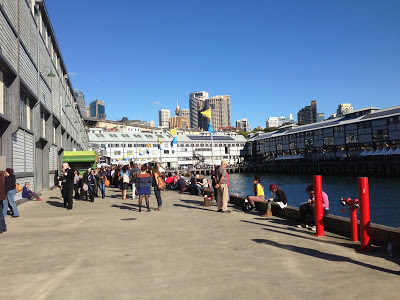 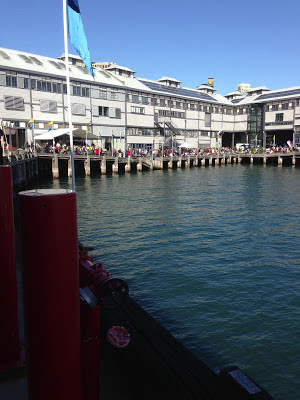 Queuing was a feature of the two days, but with views like this, one couldn't complain too much!
I successfully saw all but two of the events that I really want to catch by using no queuing-Nazi behaviour whatsoever (unlike like some folk who rudely raced out of sessions as soon as question time was announced so they could be the first in line at the next event!)
The two sessions I was 'unsuccessful' with turned out to my advantage as I used the opportunity to try something new both times (more of that later.) 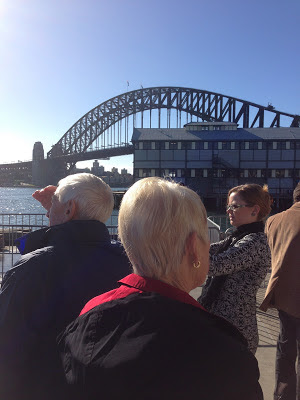 Saturday was an extremely full day.

I began with 'Boys to Men' hosted by Richard Glover. He chatted with Dr Arne Rubinstein (I now have his book The Making of Men), Craig Silvey and Richard Beasley (both authors who have written coming of age stories about teenage boys in Australia.)
With two teenage boys in my home this talk was not only inspiring, funny and timely...it was also necessary, comforting and practical!
The main point I got out of this was that you can't tell a teenager how to live their life.
But you can share your stories with them.
Stories of how you grew up, your relationship with your own parents, your successes and failures, your experiences of grief and loss, your attitudes towards money, the opposite sex, dating, work etc. 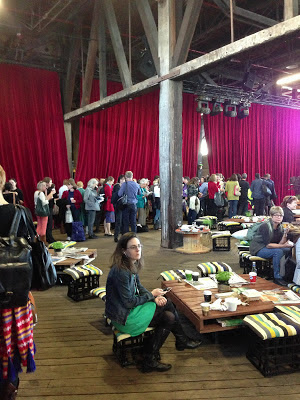 'Love and Laughter' featured William McInnes (actor/author) and Graeme Simsion (author of the Rosie Project). They discussed how humour and warmth informed their writing.
I had been hearing a lot of good things about The Rosie Project; after listening to Simsion talk, reading his book has taken on a much higher priority for me.
'What the Classics Teach Us' was a more serious chat, although all three speakers - Robert Greene, David Brooks and Richard Gill managed to inject a lot humour into the hour.
I came away from this one with a desire to read more about the myth of Orpheus, Seneca and Stoicism. I also liked Brooks definition of the classics -
"classics embody the wisdom of the tribe as well as the stupidity of the tribe."
'Stella Prize Trivia' was a light-hearted break after the classics. Sipping a glass of wine, we all relaxed around a café type room as 14 women (authors, media personalities etc) participated in a fun quiz loosely based on the new Stella award for women and all things bookish. Audience participation was encouraged and rewarded by free books!
The final session of the day that I wanted to see was on 'Australian Character' but so did everyone else. I then joined the line for the 'Young Australian Writers' session and missed out by just three people!
Instead of feeling all forlorn, I decided to use this extra time to take the long walk back to the ferry. The long walk took me around Dawes Point and underneath the Harbour Bridge with magnificent views of the harbour, the Opera House and Circular Quay.
It was the perfect way to end a stimulating day.
(If you'd like to see more pics from my walk click here.) 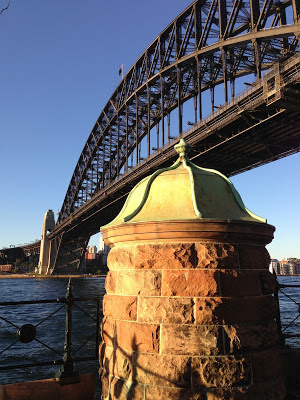 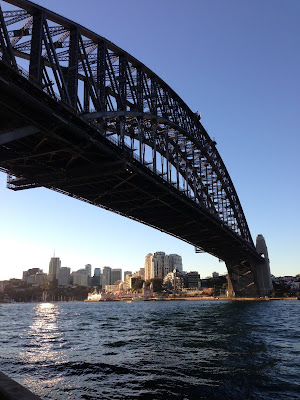 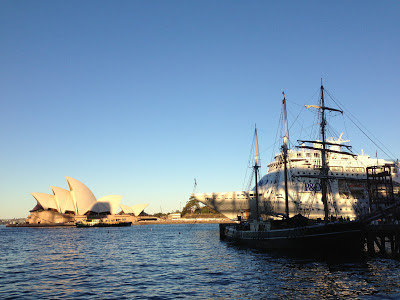 Sunday began with an amazing storytelling performance by Daniel Morden of the Odyssey. It was a spellbinding experience that made me feel how it must have been in a pre-literate world. The experience would have been enhanced by comfortable seating around an open fire with a mulled wine in hand, but we can't have everything!
'Jane Austen's Pride and Prejudice' was my only paid event for the whole weekend. Anyone who regularly stops by my blog will know just how much Austen love I have and how thrilled and excited I was to be going to the event.
I was not disappointed.
Amanda Hooton, Damon Young, Tegan Bennett Daylight and Susannah Fullerton love all things Austen as much as I do (if not more so since they all have published books on this endlessly engrossing topic!) Books, by the by, that I now have in my possession (so watch this space for reviews!!)
The next session started off with disappointment as I missed out of getting into the Art and Pleasure of Reading. After finding myself a coffee and a bite to eat I wandered into 'Dear Sugar Advice on Life and Love' instead. I had never heard of The Rumpus or Cheryl Strayed before...but a lot of people in that room had...and a lot of people were deeply affected by it.
My final session was 'Food: New Writing' where three authors read pieces from their work that were ...well...food related. I have to confess that a sudden weariness overtook me during this session. It may have been the warm afternoon sunshine streaming in through the large windows or simply the cumulative effect of a very full, busy weekend, but I only listened to one and a half readings before deciding to go home to have a little lie down!
Posted by Brona Labels Sydney Writers Festival at 29.5.13
Email ThisBlogThis!Share to TwitterShare to FacebookShare to Pinterest