The Misogyny Factor by Anne Summers 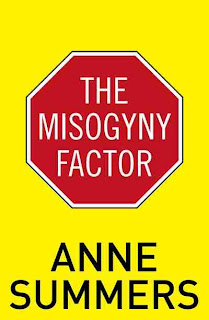 This book had almost gone unnoticed on our shelves until the recent events in Australian politics. But then, all of a sudden, we're getting double-barrelled requests for this book and The Stalking of Julia.

It's funny the difference a week can make!

To say I felt anger whilst reading The Misogyny Factor is an understatement. But I also felt disappointment, frustration, despair and at times, I felt physically ill.

Anne Summers is a well-respected journalist, writer and feminist.  I trust her work from experience. And that's what makes this book so uncomfortable to read. Summers is telling us the truth and it's hard to read.

Summers talks about the three indicators for success that would show us that women's equality had been achieved. They are "inclusion, equality and respect." While "the misogyny factor" is the obstacle.

Summers acknowledges the dictionary meaning of misogyny (hatred of women) but expands her definition to include the more complicated attitudes and behaviours that this implies and "that stand in the way of women being included, treated equally and accorded respect."

The first half of The Misogyny Factor is full of facts and figures. There are the 'firsts' and all the successful legislation passed to ensure that women, on paper, in law, have equal rights. But then she counters with all the backsliding, the downgrading and the reduced policies that have happened since.

I'm always cautious when people start quoting facts and figures. Facts and figures can be manipulated and interpreted to mean anything you want, so I was glad that Summers book wasn't just chapter after chapter of statistics and percentages.

The second half of the book focuses on Julia Gillard and her time as Prime Minister. Summers has documented page after page, incident after incident, media report after media report, twitter bile after twitter bile judging, criticising and accusing Gillard purely on the basis of her gender. You should be able to disagree with someone's politics or policies without referring to gender, religion or race. But in this case, it seemed impossible for many, many people in Australia.

It would be easy to come away from this book feeling nothing but despair, but Summers finishes with some action guidelines. The main one is "it stops with me".

"Next time you get one of those emails, don't delete it - send it back to whomever sent it to you and tell them: it stops with me. When someone in your company refers to the Prime Minister disrespectfully, don't ignore it - tell them off: it stops with me. "