I know the pleasure of rereading Jane Austen intimately.

I know that to reread Austen is to delve deeper into the intricacies of her characters, to appreciate her sparkling dialogue, her wit, her clever use of letters, her ability to use free indirect speech is remarkable, as is her use of contrast and irony to craft her novels into such beautiful shapes.

I've reread Pride and Prejudice & Persuasion almost too many times to count. Sense and Sensibility, Emma and Northanger Abbey have been reread 2-3 times each. I've also watched most of the BBC TV series, movies and spin-off of the various novels numerous times....except for Mansfield Park.

I've never seen a movie or BBC production of it and I've read it only once - many, many years ago.

Until now!
For Austen in August I decided it was time to reread Mansfield Park. To see if a reread would reveal the intricacies and complexities and the beauty of Jane Austen in a similar way to her other novels.

To cut a long story short...it did. 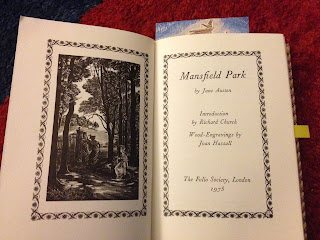 I remembered the basic storyline, but there were so many details that I had forgotten, it was like reading something completely new.

Except for the fact that it seemed so familiar at the same time!

I kept seeing parallels between characters in MP to many of JA's other books.

Fanny's delicate health reminded me of Anne Eliott's. Her extreme shyness brought to mind Georgiana Darcy. Julia and Maria were kindred spirits with the Musgrove sisters as well as Bingley's sisters. Indolent, sleepy Mrs Bertram was Mr Hurst. Mrs Norris was the obnoxious wife of John in Sense and Sensibility. Miss Crawford reminded me of Isabella in Northanger Abbey and Henry Crawford had a touch of the Wickham's.

But MP does have some surprises.

We know that JA likes her main characters to be flawed - they make mistakes and learn from them. So when we see Henry Crawford moving from using Fanny as a plaything to really appreciating her values, we suspect that this could be the relationship that Fanny also needs to bring her out of herself.

We also see the potential for Mary Crawford to grow and mature. 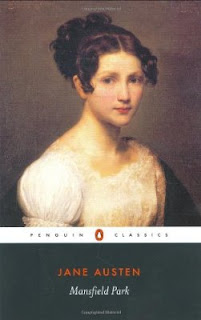 Except for this one, telling moment...when Mary and Henry are discussing his plans for Fanny, Mary says, "I know that a wife you loved would be the happiest of women, and that even when you ceased to love, she would find in you the liberality and goodness of a gentleman." (my italics)

As we know, the marriages of this time were not always happy affairs - that many were mercenary, loveless arrangements. However JA's oeuvre is all about her favourite couples marrying for love. A love that is well considered, well suited and designed to stand the tests of time.

The fact that Mary & Henry don't take marrying for a lifetime of love seriously is a critical flaw in their characters. From this point on you know that Henry (& Mary) are not going to be capable of the change that JA usually allows her favourites.

And maybe that's why the ending of this book is a little unsatisfying.
The growth and change in Edmund to appreciate Fanny is not dramatic enough and happens in the last few pages of the story almost as an after thought. He learns that all that glitters is not gold! 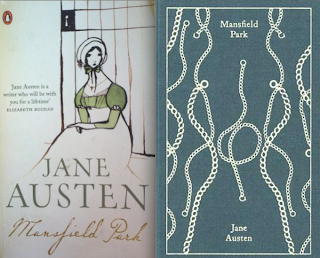 Fanny's character development spans the entire book but is also very subtle. She learns to stand up for herself which is actually a pretty major achievement for an extremely shy person, but her love for Edmund stays strong despite lack of encouragement or even hope.

I enjoyed MP far more than I anticipated. As a shy person myself, I felt for Fanny and applauded her many acts of bravery and courage. Edmund was a bit of a dick for pretty much the entire novel, but you could see that his misadventures in love would make him forever grateful and appreciative of the life he would have with Fanny. And it was obvious that their love would mature into a satisfying, enriching lifelong relationship. Shy, quiet, serious people deserve to find the loves of their lives too :-)
Posted by Brona Labels 1001 Books, Classic, Jane Austen, Readalong at 20.8.13
Email ThisBlogThis!Share to TwitterShare to FacebookShare to Pinterest