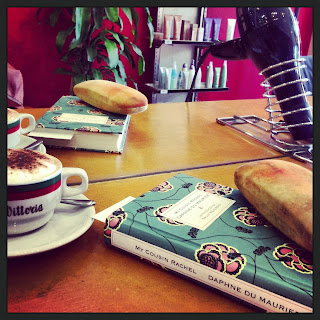 My Cousin Rachel was my lucky number #4 for the latest Classics Club Spin.

It's a book I've been wanting to read ever since 2007, when I read my first Du Maurier - Mary Ann whilst travelling around the UK.

I was so ready for Du Maurier's gothic, romantic style of writing after a spate of factual, matter-of-fact books recently. I loved every minute of reading it. I took it everywhere with me, including the hairdressers (photo). I couldn't put it down.

My love for this story was also influenced by the edition that I read - one of the gorgeous Virago Modern Classics Designer Collection. The cover was designed by Neisha Crosland and is called 'Flamenco'. It also featured an introduction from Sally Beauman (which was giving away too many plot secrets so I didn't read it through!)

None of the 3 main characters were people I would like to spend any time with in real life. The boys with their selfishness, misogyny & arrogance and Rachel with her money-grubbing, manipulative behaviours would drive me crazy! But together, in a book, they were compelling reading.

Du Maurier left loads of room for doubts about all their intentions & motivations. The reader is therefore, never quite sure who was being wronged or who was being used & abused. By the end though, I couldn't help but feel that nowadays Rachel would be diagnosed with some kind of personality disorder. Philip and Ambrose didn't really stand a chance against her scheming, sexual advances.

I've read a number of articles about the feminist nature of the book and the number of women's issues that it explores. Obviously financial security and independence were (& still are) major women's issues.

Rachel lived in a world where women had to marry for money (as opposed to love) to secure their futures. But choosing a manipulative 'heroine' who was irresponsible & extravagant with other people's money (& feelings) wasn't likely to endear her to modern audiences.
At least not this particular audience! I've met one too many Rachel's in this modern world to make me feel much sympathy for her position.