This weeks Friday Flashback is for younger readers. It is still a favourite of many Australian teacher's and features on State premier's reading lists. 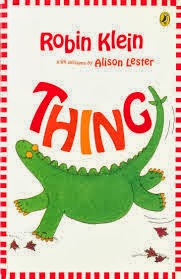 It won the CBCA award for junior readers back in 1983.

Thing written by Robin Klein & illustrated by Alison Lester is a sweet tale about a girl called Emily who dreams of having a pet. But Emily lives in an apartment and the landlord doesn't allow animals on the premises.

Everything changes when Emily discovers a vegemite coloured 'rock' in the park.

Thing works so beautifully because Klein treats the drama of having a pet stegosaurus so normally. Thing likes to watch TV, it can disguise itself as pieces of furniture or shrubbery and loves to play hide n seek.

Emily & Thing's story became so popular that Klein & Lester teamed up 2 years later to produce Thingnapped when we see how well (or not) Emily and Thing cope with being separated from each other.

Belonging & friendship are the underlying themes that link most of Klein's books.

She went on the publish a spate of Thing books in the mid 1990's called Thing Finds A Job, Thing's Concert, Thing's Birthday and Thingitis. As well as enjoying success with her series for older readers starring Penny Pollard and Alison Ashley throughout the 80's and 90's.

Sadly Klein suffered from an aneurysm about a decade ago and has been unable to write since.
Posted by Brona Labels Australian, CBCA, Friday Flashback, Younger readers at 11.10.13
Email ThisBlogThis!Share to TwitterShare to FacebookShare to Pinterest