Dancing on Coral by Glenda Adams 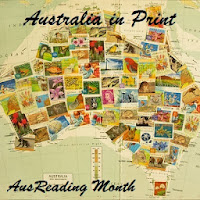 Glenda Adams won the 1987 Miles Franklin Award with this novel about Lark Watter's determination to leave Australia for the big, wide world.

This is a theme that reflects the real life experiences of a whole generation of Australian writers, scientists, artists, philosophers etc. throughout the 50's, 60's & 70's.

To this day, we still have the "tall poppy syndrome" where anyone who is "getting too big for their boots" is brought back down to size. We're one of the few nations that doesn't wholeheartedly support, encourage and glorify it's successful people (unless, of course, we start talking about sport!) 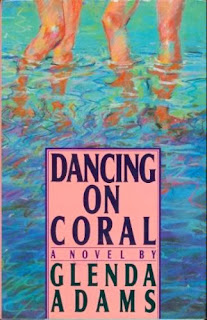 In high schools all around Australia, it is the sporting heroes that gain social success & kudos, not the academic kids. It's okay to say you won your race or game, but it's not cool to talk about coming first in science again.

Which is why we had a whole generation of smart people leave our shores during the 50's, 60's and 70's.

Europe and America were seen as the places to be if you wanted to be part of a thriving, stimulating, intellectual and creative world.

Lark (and her father) both felt a desperate need to leave Australia to experience a full, enriching life.

Mr Watter wastes his life trying get rich quick schemes and other bizarre attempts to leave the country.

Lark just wants to immerse herself in the intellectual culture of another country....and get married to one of the smart ones!!!

"she hoped that one day she would be qualified to marry Tom, after she had improved her mind. "

She hooks up with a group of atrocious pseudo-intellectuals at uni. They are rebels with a cause - judgemental, superficial, self-righteous and full of their own morality. "Donna Bird...looking like some kind of court jester, always arguing and waving her arms about, always surrounded by groups of the important students - the libertarian who wore no shoes and tied his khaki trousers with a piece of rope and wrote lewd columns for the newspaper; the architecture student who was caught by a security guard on the floor of the library stacks with the psychology fresher; the leader of the student conservative club who was only known by his initials."

I'm not sure I liked any of the characters, or even cared very much about what happened to them. I wanted Lark to wake up to herself and stand on her own two feet. I wanted her to see through the vacuous show these other people put on; they were no better or no worse than anyone else; she had a right to her own opinion without these ghastly people laughing at her or putting her down for them.

It was a frustrating read, funny at times; even uncomfortable. It was certainly a fairly faithful portrait of a certain group of people in Australia at a certain point in time, with variations on the theme still present today (I went to uni with a Donna Lark-like group as well!)
Posted by Brona Labels AusReading Month, Australia in Print, Australian, Miles Franklin Award at 25.11.13
Email ThisBlogThis!Share to TwitterShare to FacebookShare to Pinterest