Pastures of the Blue Crane by H.F. Brinsmead

When I first discovered Pastures of the Blue Crane on my school library shelf as a teenager, I thought that I had struck gold - that I had uncovered some little known Aussie treasure. 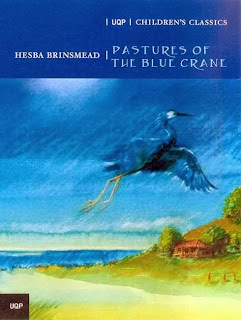 I have since discovered that Pastures of the Blue Crane won the CBCA Book of the Year Award for 1965 & that Hesba Fay Brinsmead (1922 - 2003) wrote a lot of children's book.

I recently found Brinsmead's 2003 obit in the SMH which summed up nicely a lot of what I wanted to say about this book...


"Brinsmead's most famous book remains her first, Pastures of the Blue Crane, published in 1964.

This novel, set in the Tweed district, won the Children's Book of the Year Award and the Mary Gilmore Award, and achieved an international reputation.

She also won a Children's Book of the Year Award for her landmark Longtime Passing (1971), the first of a semi-autobiographical trilogy set in the Blue Mountains.


Pastures of the Blue Crane was also the source of one of the first mini-series on ABC television. It is a coming-of-age story about a teenage girl, Ryl Merewether. Ryl is all alone in the world - or so she thinks - when she suddenly inherits a rundown shack in northern NSW, which comes complete with a crusty old grandfather and some other surprising relatives she didn't know about.


In this little adventure story, Brinsmead tackles many big issues, including the irresponsible property development ruining the pristine Tweed coastline, and the casual racism, sexism and narrow-minded conformity of Australian society.


Brinsmead was a generation ahead of her time as an environmentalist, being an early campaigner for Lake Pedder and the Franklin. She led the way as a sensitive and wry commentator on Australian society, a chronicler of pioneering days, a keen and witty observer of family life, and was among the first authors to tackle indigenous issues.
She was a valiant writer, who overcame adversities that would have stumped a lesser person.


Hesba Fay Hungerford was born in the tiny Blue Mountains settlement of Berambing in what was then the remotest of wildernesses.


All her life, Hesba was known as "Pixie" to her friends and family. The nickname suited her spritely personality, her will-o'-the-wisp frame and her sparkling demeanour."


This book struck a chord with me at the time.
My dad grew up in the Tweed and we spent many, many family Christmas' in the area with aunts, uncles, cousins and grandma. My memories of the area date from the early 70's on...just 5 or 6 years after Brinsmead wrote Pastures of the Blue Crane.

As I read, I was able to picture the streets, the mountains, the banana plantations, the cane fields, the beaches exactly as she described them. I could smell the smoke, the humidity & the lush ripeness of the area. I could taste the fruit and hear the screeches of the insects, birds & bats.

I also really related to Ryl - the loner, the outsider, who didn't feel like she belonged to anywhere or anyone.

One of the curious things for me as I've reread a number of these Australian children classics this week has been remembering the " casual racism, sexism and narrow-minded conformity of Australian society" at the time.

There are times I despair that Australian society has moved on very far from those days.

Pastures of the Blue Crane still holds up as a sweet coming-of-age story despite the dated use of language. The themes of belonging & identity bind it together.

Highly recommended for anyone looking for a 'real' story - there's not a vampire, werewolf or dystopian baddie anywhere in sight!