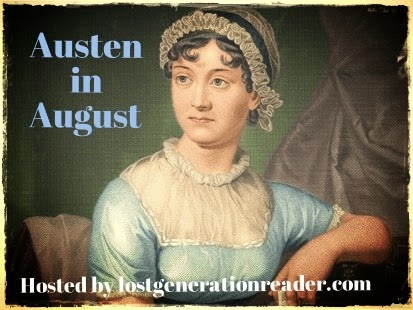 Austen in August is back again this year, with Jenna from Lost Generation Reader at the helm.

Last year I embraced Mansfield Park for Austen in August.

And previously I have written about my love for Persuasion and Pride and Prejudice.

So where to this year?

I've decided it's time to revisit Sense and Sensibility.

Even though I consider Elinor to be a kindred spirit, the story of Sense and Sensibility, itself, has been a less satisfying experience for me.

Until, the movie starring Emma Thompson & Hugh Grant, that is.

Once I got over the incongruity of the 30 something Emma Thompson playing the role of 19 yr old Elinor, I thoroughly enjoyed her screenplay interpretation.

I have watched the movie several times since, but I have never revisited the book. I thought this event was a fine opportunity to explore the differences, the similarities and the various re-interpretations that exist between the book and this particular movie.

If I have time, I would also like to read Joanna Trollope's recent reworking of Sense and Sensibility.
What will you be reading this month?


Until then, I leave you with Edward Ferrars,
“I never wish to offend, but I am so foolishly shy, that I often seem negligent,
when I am only kept back by my natural awkwardness."