My Ántonia by Willa Cather 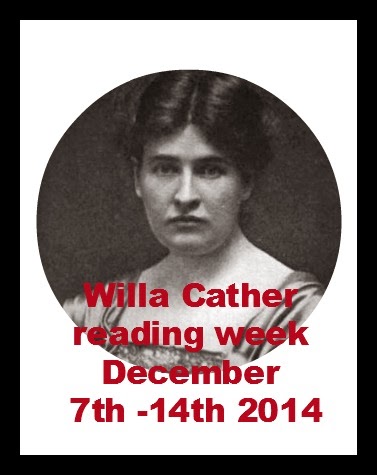 I read My Ántonia as part of Heavenali's Willa Cather Reading week.
It was my first Cather - the first of many, I now realise!

Reading My Ántonia was like falling into a lovely warm, cosy doona. It was comforting, it was some how familar, like a dear, old friend & it was generous, big-hearted & welcoming....just like Ántonia herself.

As Jim Burden remembers his childhood and his friendship with the slightly older 'Tony', Nebraska, farm life and that particular time in American history become infused with the sweet glow of nostalgia. Cather captures the rhythms & pace of small time life perfectly - it's comforts and its ennuis.

As many of you will know, I have also been reading 6 poems by Robert Frost in honour of my stepson's HSC course.

Images of apple picking, harvesting, be-dewed fields & woods filled with snow have been haunting my dreams. Cather's depictions of Nebraskan prairie life merged with these fleeting images to create a mood of deep belonging & knowing.

Like Frost, Cather's characters are shaped by their environments. The wide, open, lonely prairies, prone to extremes of weather, test not only character but become apart of the romantic, hard-working world-view that both Ántonia and Jim develop. Ántonia is also heavily influenced by her memories of her youth in Bohemia when her father was happy.

Ántonia believes the best of people, takes pride in her background & embraces change and catastrophe with a  sense of stoicism & adventureness.

Ántonia's story is told entirely from Jim's point of view, so there are some sections that fail to satisfy. Even as we enjoy seeing Jim come of age, we soon realise that we do so at the risk of losing sight of Ántonia. There are whole slabs of her life we can only see through Jim's sentimental eyes.

I'm an historical fiction fanatic...and when it is written as beautifully and evocatively as this is, then I will rave 'til the cows come home!

As a sidenote, I found the descriptions of the (native) red grass plains beautiful - in the summer reflecting & waving the sunset or in the winter bowed down by snow. As time passed and more land was ploughed under for farming, one could foresee the doomed practices that helped to create the dust bowl disaster of the 1930's (unknown to Cather at the time, as she published this in 1918).


"As far as we could see, the miles of copper-red grass were drenched in sunlight that was stronger and fiercer than at any other time of day....The whole prairie was like the bush that burned with fire but was not consumed."

"Big white flakes were whirling over everything and disappearing in the red grass."

"The old pasture land was now being broken up into wheatfields and cornfields, the red grass was disappearing, and the whole face of the country was changing."

"I took a long walk north of the town, out into the pastures where the land was so rough that it had never been ploughed up, and the long red grass of early times still grew shaggy over the draws and hillocks. Out there I felt at home again."
Posted by Brona Labels Classic, Historical Fiction, Readalong, Willa Cather at 12.12.14
Email ThisBlogThis!Share to TwitterShare to FacebookShare to Pinterest