I'm reading North and South by Elizabeth Gaskell (1810 - 1865) with It's All About Books, Jenni Elyse & Kami's LIbrary Thoughts.

The first discussion highlighted how much of North and South was based on Gaskell's own history.

The middle section seems to be where the views, ways & ideas of the North and the South collide in the eyes of Margaret.

Milton (Manchester) during the time of Margaret (& Gaskell) was a part of the northwest county of Lancashire, which also included the towns of Lancaster, Preston, Liverpool, Wigan and Blackpool.

The Industrial Revolution saw this area come into its own as mill towns and collieries boomed. According to wikipedia Manchester & Liverpool not only dominated the global economy of the time, but they were the birthplaces of modern capitalism.
And Blackpool become the seaside resort that the workers flocked to for their traditional wakes week (see my Four Seasons post about Blackpool here).

In fact, Manchester & Liverpool both became so big and so dominate, that in 1974 when England underwent boundary reform, they were both removed from Lancashire to form their own metropolitan counties of Greater Manchester & Merseyside.

In Margaret's eyes, Milton and its county, Darkshire is a dirty, bustling, noisy place. Her first view of Milton in chapter 7 reveals "a deep lead-coloured cloud hanging over the horizon."


"Nearer to the town, the air had a faint taste and smell of smoke....Quickly they were whirled over long, straight, hopeless streets of regularly built houses, all small and of brick. Here and there a great oblong many-windowed factory stood up, like a hen among her chickens, puffing out black 'unparliamentary' smoke, and sufficiently accounting for the cloud which Margaret had taken to foretell rain. As they drove through the larger and wider streets, from the staion to the hotel, they had to stop constantly; great loaded lurries blocked up the not over-wide thoroughfares....People thronged the footpaths, most of them well-dressed as regarded the material, but with a slovenly looseness."

In chapter 31, Margaret is still comparing Milton unfavourably to Helstone,

But Margaret's opinion of the people and their work undergoes profound changes during the middle section of the book.

By chapter 20 she "liked the exultation in the sense of power which these Milton men had. It might be rather rampant in its display, and savour boasting; but still they seemed to defy the old limits of possibility, in a kind of fine intoxication, caused by the recollection of what had been achieved, and what yet should be."

The middle section also brings on the first spate of deaths that affect young Margaret's life.

The deaths of Bess and Mrs Hale not only show us Margaret's strengths but also Mr Thorton's. We already suspected his kind, loving, generous nature, but now Margaret acknowledges it for the first time.
Furthermore, the death of Mrs Hale bonds Margaret and her father to Milton - as her final resting place, Milton will now always have a tender place in their hearts.

I was curious about the Victorian custom of no women allowed at the funeral. The book suggested it was to do with emotional, uncontrollable women & I thought surely not! Margaret was the strong, resilient one after her mother's death while her father and brother fell apart, leaving everything to her.
So then I thought it may have had something to do with their corsets making them unable to walk behind the hearse to the cemetery.

But then I found this fabulous blog by Kathryn @The Regency Redingote that discussed the very issue!

Corsets did play a part, but class sensibility was the driving force.
The upper class wanted to show their natural superiority in the new age of reason & rationalism by enforcing 'polite society' on its members. Part of polite society involved showing no emotion in public. Self-control was highly valued.
The long funeral processions were also seen as being dangerous for women.

I wonder if Gaskell wrote in so many deaths as a way of highlighting yet another class difference?

The Pride and Prejudice parallels in the love affair continue in the middle section. The heated discussion about whether Mr Thornton is a gentleman or a man reminded me of Lizzie's riposte to Darcy about behaving in a more gentleman-like manner!

As for Frederick! You want to love him for Margaret's sake, but the whole time you're left wondering what he's up to. Can you really believe him or trust him? Can Margaret count on him when she needs him?

Perhaps Frederick is another way for Gaskell to highlight how alone Margaret really is. Her strength and resilience are born of necessity. She can rely on no-one but herself.
When the time comes (I assume it comes!) for Margaret and Mr Thornton to get together they will do so as independent equals.

Now it's time to go off and see what everyone else is thinking about North and South. Hopefully I will have time to join in the twitter chat this time too :-) 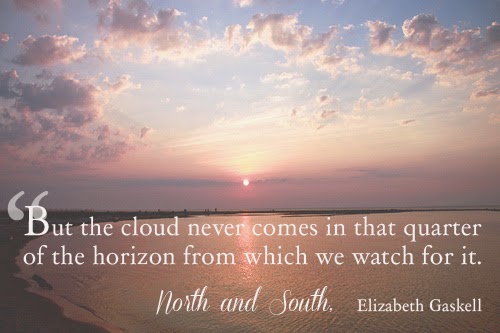