Memoirs of a Fox-Hunting Man by Seigfried Sassoon

Normally a book with the word 'fox-hunting' in the title would have been an automatic turn-off.

But the new Faber Modern Classics covers have a weird appeal.

My life is also soooooo crazy, out-of-control, mad at the moment that I'm in desperate need of comfort - comfort reads, comfort food, comfort clothes and comfort other worlds in which to lose myself.

It turns out I needed to escape into a more innocent, gentle and slower time almost as badly as Sassoon did after his time in the trenches of WWI.

Memoirs of a Fox-Hunting Man is Sassoon's semi-autobiographical remembrances of life in rural Kent before the ravages of WWI scarred a generation. They are lovingly nostalgic, yet tinged with the bittersweet knowledge of what is to come.

They are loosely based on his childhood but read more as a collection of boys own adventure stories. George Sherston is a reserved, cautious boy living alone with his Aunt Evelyn. Thanks to the kindly interest of the groom, George is given a pony at the age of nine. This leads eventually to day excursions to watch the local hunts and races.

The fox-hunting is never described in gory detail. Sassoon sticks to the wholesome and slightly romantic riding side of things with a bit of local gossip thrown in for good measure. The story is more about George's coming of age - his thoughts, his moods and his doubts and insecurities - as he enters society and begins to race with the adults.

MOAFHM is, ultimately, a love letter to a time and place long gone.

Sassoon is not concerned with class differences or cruelty to animals - we are after all seeing the world through the uncritical eyes of a young boy. Occasionally, though, an older, more reflective 'George' provides the voice of impending change and loss.

The air was Elysian with early summer and the shadows of the steep white clouds were chasing over the orchards and meadows; sunlight sparkled on green hedgerows that had been drenched by early morning showers. As I was carried past it all I was lazily aware that my dreaming and unobservant eyes that this was the sort of world I wanted. For it was my own countryside, and I loved it with an intimate feeling, though all its associations were crude and incoherent. I cannot think of it now without a sense of heartache....


Those long days of dry weather and white figures moving to and fro on the greens now seem like an epitome of all that was peaceful in my past. Walking home across the fields from Butley, or driving back in the cool of the evening after a high-scoring game on the county ground at Dumbridge, I deplored my own failure or gloated over one of my small successes; but I never looked ahead, except when I thought about next winter's hunting. The horses were out at grass; and so, in a sense, was I.

Dotted with county cricket matches and country dances, Memoirs of a Fox-Hunting Man has been a genteel stroll down memory lane in a period of history that I feel very comfortable in losing myself.

Sassoon followed up this highly successful story with two more novels to complete The Sherston Trilogy - Memoirs of an Infantry Officer (1930) and Sherston's Progress (1936).

Interestingly, Sassoon's time spent in a psychiatric hospital at the end of WWI was also fictionalised by Pat Barker in her well-known book Regeneration (1991).

MOAFHM was the winner of the James Tate Black Memorial Award (one of the UK's oldest literary awards) in 1928.

The other 15 titles to look out for in this current range of Faber Modern Classics are: 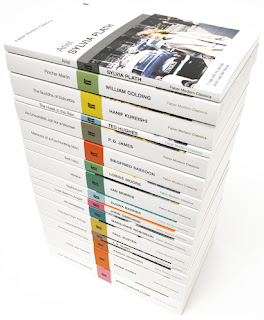 The Buddha of Suburbia by Hanif Kureishi

Look Back in Anger by John Osborne

The Remains of the Day by Kazuo Ishiguro

An Unsuitable Job for a Woman by P. D. James

The Hawk in the Rain by Ted Hughes

Oscar and Lucinda by Peter Carey