I do love August and Adam@Roof Beam Reader's Austen in August meme.

This year I reread Emma for the third time in my lifetime (so far!)
Emma is now a classic study of friendship, truth and character, but each reread reveals hidden depths and layers.

There is already an incredible array of opinions and analysis about all of Jane Austen's novels and right now I feel unequal to adding to this body of scholarship.

Perhaps the best I can do is discuss what I have discovered with each reading of Emma.

Over the years I have realised that it is the rereading of Austen that reveals her true genius. All her stories contain puzzles, misunderstandings and hidden agendas that only become apparent with a reread, but none more so than Emma.

When I first read Emma as a teenager, I struggled to find any merit in the story.

It's first problem was that it wasn't Pride and Prejudice! Emma wasn't Lizzie and there didn't appeared to be any tall, dark, brooding hero to fall in love with.

I also didn't like and couldn't relate to Emma herself. I got frustrated by all the secrets, 'in-jokes' and duplicity.

My second reading (in my early 30's) revealed Austen's mastery though.

Austen had in fact carefully presented to the 'knowing' reader all the clues required to see through the many deceptions and secrets. With this insider knowledge we could all see how the characters misconstrued or deceived themselves to suit their own purposes. Very cleverly done Jane Austen! Brilliant writing and plotting. Bravo!

It was during this reread that I also fell in love with Mr Knightley.

But it was my current reading of Emma that allowed me to enjoy and appreciate all the players for who they really are, even the Elton's!

Their friendships, their connections and motivations were all so delicately drawn.
Their nuances, flaws and depth (or shallowness as the case may be) of character were all carefully crafted.

Throughout this reading, I felt for Jane Fairfax far more than before. Her reserve and restraint were painful to watch as she struggled with her moral conscience and her secret.

Frank Churchill also revealed himself as the (lovable) cad he is from start to finish - the non-attendance at his father's house, the secret engagement, the flirting with Emma, the teasing about Mr Dixon, the pianoforte ... just to name a few of his indiscretions.
He actually doesn't deserve Jane at all and I fear for their future together as she will be constantly have to remind him of what the right and moral thing to do is.

Being someone's appointed moral guardian is no happy place to be.
Jane will constantly feel the pain and embarrassment of his moral softness and Frank will constantly feel rebuked and criticized. He will wax lyrical about her goodness and put her moral standards up on a pedestal until it actually stops him from doing something he really wants to do.

My beautiful Folio Society edition has an Introduction by Richard Church. I found his opinion to be very thought-provoking:

It is the clarity of portraiture in the delineation of those characters which gives the book its authority as the masterpiece of the six novels. Most readers will agree about that, though there are some who prefer Mansfield Park, and others who think that Persuasion the most mature. But surely for sheer technical, literary perfection, Emma must bear the palm. Its flawlessness makes it elusive for the critic. It includes some autobigraphical allusions, with the author interpolating herself and her problems into the story.... 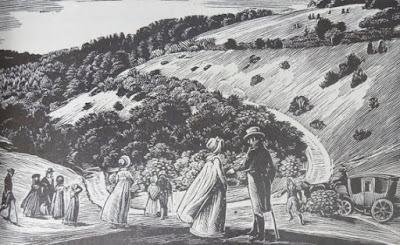 Until recently I would have laughed off any idea that MP was a superior Austen novel, let alone, the superior novel.

But my reread of MP two years ago, changed my mind completely.

Persuasion will always be my preferred Austen - for story, for complexity and maturity and for it's heart that so appeals to mine. But MP has now overtaken P&P (on my Austen ranking scale*) thanks to it's 'literary perfection' and also thanks to Fanny.

I was also intrigued by Austen's real life 'interpolating' into Emma's story.

As I reread, I looked out for biographical examples.
There were Emma's comments to Harriet on marriage, woman and money "A single woman, with a narrow income, must be ridiculous, disagreeable old maid!", and Isabella's motherly horror about giving up a child to another branch of the family to raise. I also wondered about Mr Dixon, the suspected married lover who runs off to Ireland - could this be an oblique reference to Jane's Thomas Lefroy?

Which neatly reminds us all that Jane Austen herself also kept secrets.


Seldom, very seldom, does complete truth belong to any human disclosure; seldom can it happen that something is not a little disguised, or a little mistaken.