A Far Cry From Kensington by Muriel Spark 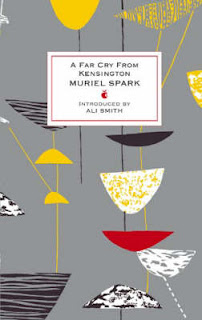 A Far Cry From Kensington was my Classics Club spin #10.

I have now read The Prime of Miss Jean Brodie twice.
Both times I was underwhelmed and left wondering what all the Muriel Spark fuss was about.
The only reason I even had this lovely book on my TBR shelf at all was thanks to its aesthetically pleasing cover!

'Calyx' is a well-known textile design by Lucienne Day. It was launched at the Festival of Britain in 1951, which makes it a perfect fit for this story set in London during the 1950's.

Mrs Hawkins is a young, rather overweight, war widow, working in the publishing industry.
Through Mrs Hawkins, Spark is able to comment on the English class system and Catholicism. She can pass on advice about seeking a job, how to concentrate and manage difficulties.
We see post-war London trying to get back on its feet.
And we see the consequences of plain speaking; what happens when the truth is actually spoken out loud and what happens to those who are taken in by the lies and deceit instead.

We begin with Mrs Hawkins suffering from insomnia during the 1980's, although suffering is not really how she experiences her sleeplessness. Like everything else in her life, Mrs Hawkins finds a way to turn this time to practical good use, "Can you decide to think? - Yes you can. You can put your mind to anything most of the time."

And I think that's why I liked this book so very much.

I am an Elinor Dashwood at heart.
I'm rational (usually!) I keep my emotions under control (mostly) and I get on with the job at hand (except for when I procrastinate!)
Just like Mrs Hawkins.

Along with Mrs Hawkins, I am also a seeker of truth and principal. And we love nothing better than a jolly good ponder!


At night I lie awake looking at the darkness, listening to the silence, prefiguring the future, picking out of the past the scraps I overlooked, those rejected events which now come to the foreground, large and important, so that the weight of destiny no longer bore on the current problems of my life.


Despite this slightly melancholy start, A Far Cry From Kensington is not an angsty book.
Far from it.
Mrs Hawkins is practical and down to earth, the epitome of Spark's "aesthetic of detachment" (as described by Ali Smith in her introduction to this edition.) There is also a dry, wry humour at work.

In England love and hate are two entirely different things. They are not even opposites. According to my outlook, love comes in the first place from the heart and hate arises basically from principal.


And that's were Mrs Hawkins', seemingly, irrational hatred of Hector Bartlett comes from. There's a principal involved. Slimy, manipulative, posers like Bartlett shouldn't be allowed to succeed. And when he does, or at least, appears to, it offends Mrs Hawkins principals. The truth must be told, regardless of the consequences.

Difficulties do arise, a terrible tragedy ensues and Mrs Hawkins has cause to put her own advice to use:


It is a good thing to go to Paris for a few days if you have had a lot of trouble, and that is my advice to everyone except Parisians.

However, this book was no trouble for me at all.
I loved it.

And because you can't get enough of a good thing, here are some more 'Calyx' variations from Lucienne Day. 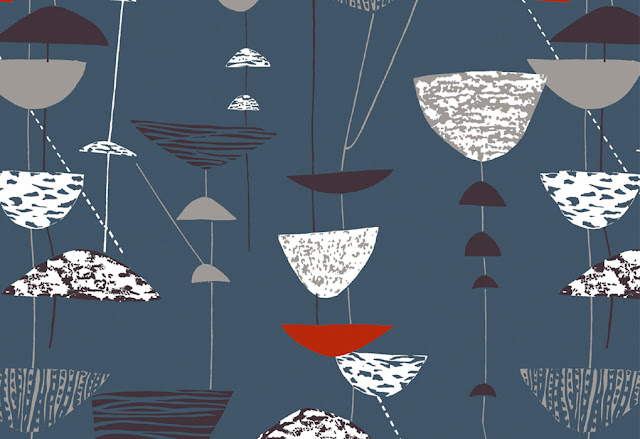 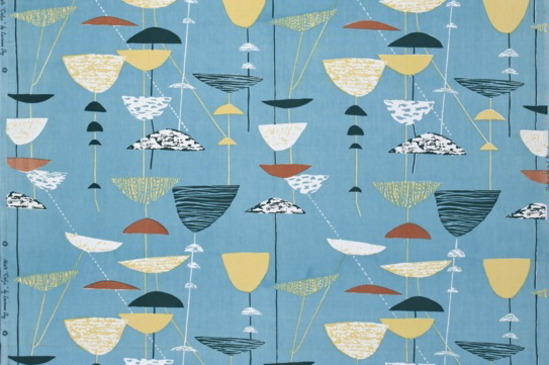