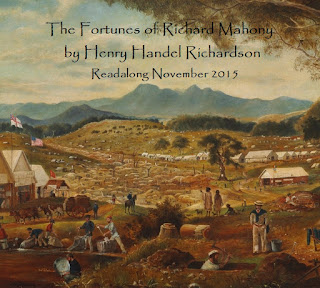 "Wife, I've a grave suspicion!" said Mahony, and took her by the chin. "While I've sat here my head in the clouds, you've been worrying over ways and means, and over having such an unpractical old dreamer for a husband. Now, child, that won't do. I didn't marry to have my girl puzzling her little brains where her next day's dinner was to come from. Away with you, to your stitching! Things will be all right, trust to me."

And Polly did trust him, and was so satisfied with what she had effected that, raising her face for a kiss, she retired with an easy mind.

This one brief paragraph half way through Australia Felix tells us almost everything we need to know about Richard and Polly Mahony.

This one paragraph not only shows us the power imbalance inherent in their relationship - Polly was only 16 when she married 30 yr old Dick but also the casual sexism of the times. It shows us Polly's awareness and acceptance of her dependence. We also see that Mahony is self-aware enough about his own character to acknowledge it, even joke about it, but not enough to do actually anything about it. We also see his 'trust to fate' attitude.

Her stories about life on the gold diggings for women helped to create a much fuller picture of Polly's situation than I would have otherwise had.

It certainly gave the night of the Eureka Stockade, as experienced by Polly and Richard, extra colour and significance.

Our history books tend to infer that almost everyone on the Diggings participated in the rebellion. Reading this novel (written only about fifty years after the event) highlights that that was not the case at all. The rebels were a small group with a common cause, with some popular sympathy, but very few committed to actually rebelling.


At the beginning of the month I posed a few questions to ponder as we read The Fortunes of Richard Mahony:

What have you learnt about the Australian way of life and history during this reading?

I was reminded of why Australian soldiers are called 'Diggers'. It's not just because of the tunnels they had to dig on the side of the hills at Gallipoli or the trenches in France during WWI. 'Digger' goes back to the time of the Gold Rush when they dug for gold side by side.

I was also harshly reminded of the differences in childhood experiences for so many during this period of history - infant mortality, illness, death, poverty and neglect. The case of Polly's niece and nephew in particular is heart-breaking - the death of their mother after the birth of the second child, the complete lack of interest in their subsequent emotional development by their father, moved from aunt to aunt at the whim of their stern father, left in the care of strangers when Polly loses her own baby at birth. Young Johnny is then sent off by himself at age six from Ballarat to Melbourne in a coach with strangers. When he heads off down the 'wrong track' as a teen, it is the fault of his bad personality and character.

And Polly's friend, Agnes, whose son is turned against her by her alcoholic, abusive husband. She is unable to do anything  or turn to anyone to stop her son also becoming an alcoholic at age nine!

Displacement - internal and external - is a central theme - what or where is home? Is it a place? An attitude? A person? An unattainable goal?

Mahony is certainly one of those early Australians who considered Mother England home. Many of the First Fleeters always considered England home and never considered their life in Australia to be a 'proper' one.
They yearned for a place they were torn from and could never return to. Even when their convict terms were over, most could not afford to return to England. Australia was never embraced as 'home'. It was always second rate. Very few attempted to embrace their new home in Australia. Most simply tried to supplant Mother England on Australian soil.

It wasn't until they had children that attitudes about Australia as home began to shift. These Australian born children only knew Australia as home. They couldn't see the point of pining for another place across the seas that they would never visit.

Of course, there were some early settlers who were only too happy to escape England and start a new life in a new country. But so many of the new settlers struggled in the harsh conditions. The extreme weather, the strange environment, the huge 'uncivilised' expanse of this beautiful country frightened and overwhelmed many of them.

Is it fate or fortune at work in Mahony's life?

Mahony tends to be a pessimist - 'it looks as if I were in for a run of real bad luck, all along the line.'


In spite of the natural gifts fortune had showered on him, Richard was not what you would call a happy man.

He also struggles to take control of his own life, letting things happen to him and around him rather than dealing with it or getting on with it or making the changes he might need to get on.


Was it straining a point to see in the whole affair the workings of a Power outside himself - against himself, in so far as it took no count of his poor earth-blind vision?


He has a belief that fate and fortune are things that happen to you - 'Fortunes were made, and lost, and made again, before you could say Jack Robinson.'


That was another shabby trick Fate had played on Richard in not endowing him with worldly wisdom, and a healthy itch to succeed. Instead of that, he had been blessed with ideas and impulses that stood directly in his way.


What other issues or themes are explored by the author?

Some of the other themes that reoccur throughout Australia Felix are:

"But when I look round me, or think back, and see what we women put up with! There was poor old ma; she 'had to be man for both. And Jinn, who didn't dare to call 'er soul 'er own. And milady Agnes is travelling the selfsame road - why she 'as to cock 'er eye at Henry nowadays to say whether it's beef or mutton she's eating! And now 'ere's you, love, carted off with never a with-your-leave or by-your-leave, just because the doctor's tired of it and thinks 'e'd like change."

"But I think youth's a fine name for a sort o' piggish mess. What's the good, one 'ud like to know, of gettin' old, and learnin' wisdom, and knowin' the good from the bad, when ev'ry lousy young fathead that's born inter the world starts out againto muddle through it for 'imself, in 'is own way."

"Ah, there's a lot of bunkum talked about life," returned Tangye dryly, and settled his glasses on his nose. "And as a man gets near the end of it, he sees just what bunkum it is. Life's only got one meanin', doctor; seen plain, there's only one object in everything we do; and that's to keep a sound roof over our heads and a bit in our mouths - and in those of the helpless creatures who depend on us."

...the haunting fear that one had squeezed life dry; worse still, that it had not been worth the squeezing.

Now, each individual year was precious to him; he parted with it lingeringly, unwillingly.

For me there were a few flaws in the writing.
HHR uses stereotypes to describe some of her characters. We now also consider some of her terms to be derogatory or political incorrect.

The occasional character pops up conveniently to make a point (like Tangye above) then is never seen or heard of again.

There is also a wordiness or perhaps a tendency towards ponderousness that infects many of the books longer passages. This affects the smooth flow of information and ideas at times.

However, I thoroughly enjoyed the descriptions of the Australian environment and weather - I could picture the bush, the heat, the flies, the creeks, the frosty mornings, the birds etc. I also really liked seeing the birth of Ballarat and the views of early life in Melbourne.

Now it's time to jump into The Way Home!
What trials and fortunes wait for the Mahony's in the old world?


In January 2007 we had a family visit to Ballarat and the Sovereign Hill museum. Below are a couple of pictures of our visit to the gold diggings village, including moi panning for gold! 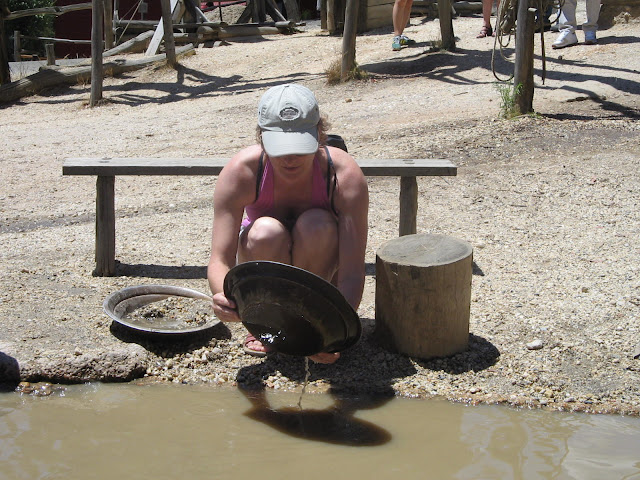 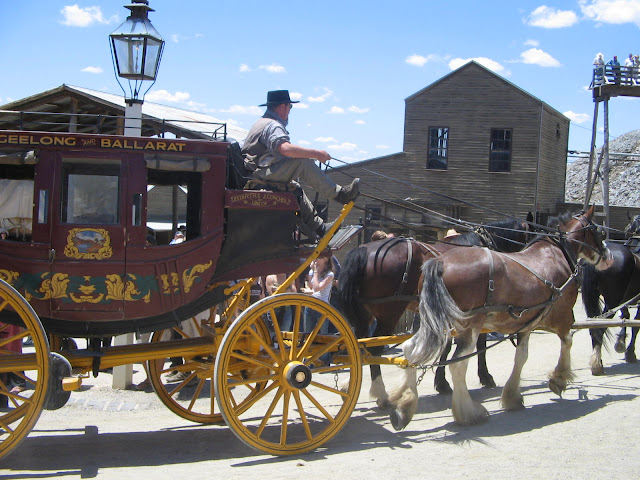 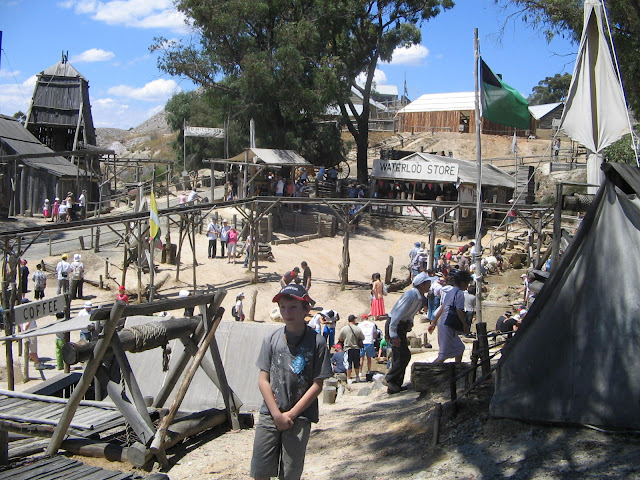 Other reviews of Australia Felix - Writing Lives and Me, You and Books.