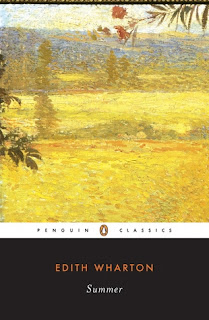 Described as the 'hot' Ethan Frome, Summer is Edith Wharton revelling in the "euphoric and depressed, confident and abjectly vulnerable" feelings that her real life love affair with Morton Fullerton engendered in her, according to Elizabeth Ammons in her Introduction to my Penguin Classic edition.

Summer features all of Wharton's trademark themes - class consciousness, the double standards that restrict and control the behaviour of women, sexual repression, change and nostalgia all mixed in with her literary snobbishness and Eurocentric cultural superiority. (It's curious how you can love an author but struggle to like them as a person!)

It has been suggested that thanks to the timing of this book (written during WWI) that Summer can also be read as an allegory of Western Imperialism, with Royall representing the crumbling, under threat patriarchal imperialism and the wild folk of the mountains represent 'the other' - the uncivilised, dangerous and mysterious, living outside the normal rules of society.

Although it's hard to know which side she is ultimately on, as small town America comes off as being a stultifying, backward, even embarrassing alternative to the mountains. While big city life is decadent, commercial and soulless.

Maybe we should all just move to Paris, like Wharton did!

An interesting read, with some glorious pastoral descriptions but not one of my favourite Wharton's in the end.