The Prodigal Son by Sulari Gentill

At the beginning of November I visited Gentill's website to check when book 8 in her Rowland Sinclair Mystery series would be published, I was delighted to discover this little message on her blog instead....

Book VIII in the Rowland Sinclair Mysteries has been scheduled for release in September 2017. That's a while away. I do love that readers care enough about my books to complain that it's too long a while.

Of course publishing schedules are for the most part out of a writer's control so there is nothing I can do to bring Rowly VIII onto bookshelves any sooner, but the heartfelt lament of some of Rowland Sinclair's most ardent fans did make me want to write something to tide them over till the book proper came out.

My intention intially was to write a short story, a prequel to the series which looked at the time when Rowland first returned to Sydney and met his louche entourage. It was to be not much more than a vignette, a glimpse of my characters in 1928 before the markets crashed. Of course Rowland had different ideas, and my short story became a novella. Writing it made me want to paint so it became an illustrated novella. 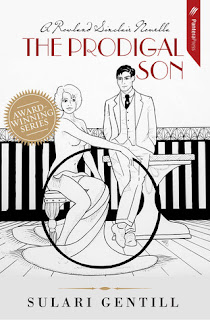 Thanks to a few other reading commitments, it has taken me longer than I planned to get stuck into this little gem.

The Prodigal Son was a quick, easy read and it helped to satisfy my curiosity about how Rowly, Edna, Clyde and Milton met. Naturally there was a little mystery and a little criminal activity which colluded to bring our four loveable characters together for the first time.

Most of the chapters are graced by the presence of one of Gentill's own illustrations. I enjoyed seeing how she pictures Rowly and his friends. They add a touch of elegance and specialness to this project.

Being a novella, the story is not as meaty or as in-depth as one of the regular Rowly books. It really has been designed to be enjoyed by existing fans of the series. Some of the quirks, the habits and the little in-jokes that have developed over the previous seven books are explained or revealed in The Prodigal Son.

It's a little like sitting down one summery evening with a good friend and a glass of wine and suddenly discovering as you chat, a little backstory about your friend that you never knew before. A little vignette that makes you nod your head and say 'ah-ha!'

Your free e-copy of The Prodigal Son can be downloaded here.