Sheila @Book Journey hosts this lovely meme every year about finding one word to represent your new year. Instead of stressing about New Year resolutions that you most probably will never keep, Sheila encourages us to deliberate on the power of just one word. 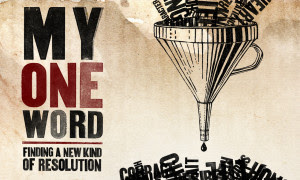 One word that can guide, instruct, support and inspire you through another year. A word that can 'take on a new meaning depending on the circumstances, and can come out at the end with a whole new meaning than first anticipated.'

For the past few years I have watched and read Sheila's one word journey with awe and admiration. But I never felt like joining in. I had my word.

At some point in my early twenties, I adopted the word HOPE. 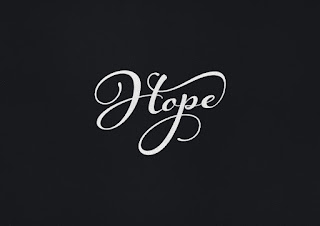 It has guided me through so many good times and bad times and all the other times in between, that I have never felt the need to find another word. I believe that good things can happen. Not always. Not all the time. But enough.

I HOPE for the best.

At times, though, I've found that other words have attached themselves to me! Words which reflected the situation I was in at that point.

In my late twenties, with my 30th birthday looming large, I adopted YEARN. 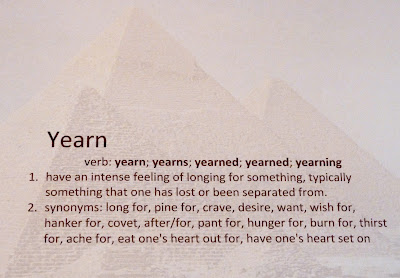 Gradually the yearning disappeared, and BALANCE became the thing.

The sudden death of a close friend in my mid-thirties caused me to reassess what I was doing with my life - what was important to me and what did I really want to spend my time on. 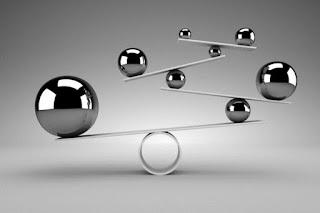 BALANCE helped me to make some much needed changes to my work life and home situation.

However, reading Sheila's post this week made me realise that BALANCE is no longer something I struggle with. That phase has passed on too.

Which brings me back to HOPE - the foundation stone from which I do everything. I feel that HOPE is my life word that will guide me through every single phase of my life.

Which is when I realised why Sheila's post really struck a chord this year.

We (Mr Books and I) are entering a new phase of life at home and personally.

BALANCE was what I needed during most of my 40's as I juggled a new family, a new home and a new career. But now those young booklets are all grown up (mostly) and Mr Books & I are looking around at all the spare time we suddenly have on our hands. We both have careers that feel like a change is required or imminent. I am crashing into perimenopause with mood swings, bodily changes and iron deficiency issues.

Middle age is facing us squarely in the eye and demanding to be acknowledged.
I'm not sure I'm ready for this phase.
I'm not ready to be my parents age (the age I remember them being when I was a teenager and thought them to be terribly old and redundant)!

I feel panicked and a little anxious and uncertain once again.

How did we get to be this age so quickly?
I'm not ready for our generation to be passed over by the new. I want our pop culture icons to be the pop culture icons. I don't want to be superseded, out-dated or irrelevant.

But it happens anyway.

The booklets grow up and their world becomes the world. Once, not that long ago, we were their world, but now we're not enough. That's the way is should be. But when it happens it's still a shock.

Their pop culture references are the only ones that count. The world is now their world to explore and discover and nothing we have learnt along our journey is of any use to them. Different times; different ideas. Move over!

How on earth will I manage this new phase with dignity and grace?

That's when it hit me!

My new word for this new phase of my life will be... 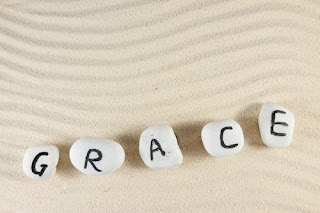 Finding an elegant way through these new times will take all the courteous good will I can muster!

I'll be curious to see how all the different meanings and applications of GRACE (below) play out over 2017.

Right now, I feel focused on my needs and how I'm going to manage these changes, but one of the definitions is all about the benefits of grace to others. I HOPE I can find my way towards that.

NOUN
1 Smoothness and elegance of movement:
‘she moved through the water with effortless grace’

2 Courteous good will:
‘he had the good grace to apologize to her afterwards’
2.1 graces
An attractively polite manner of behaving:‘she has all the social graces’

3 (in Christian belief) the free and unmerited favour of God, as manifested in the salvation of sinners and the bestowal of blessings.
3.1[count noun]
A divinely given talent or blessing:
‘the scheme has proved to be a great grace for the Church’
3.2 The condition or fact of being favoured by someone.

4 A period officially allowed for payment of a sum due or for compliance with a law or condition, especially an extended period granted as a special favour:
‘we'll give them 30 days' grace and then we'll be doing checks’
[as modifier] ‘a two-month grace period’

5 A short prayer of thanks said before or after a meal.

6 His", "Her", or "Your""Grace
Used as forms of description or address for a duke, duchess, or archbishop:
‘His Grace, the Duke of Atholl’

VERB[WITH OBJECT]
1 Bring honour or credit to (someone or something) by one's attendance or participation:
‘he is one of the best players ever to have graced the game’
ironic ‘she had deigned to grace the city of New York with her presence’
1.1[with object]
(of a person or thing) be an attractive presence in or on; adorn:
‘Ms Pasco has graced the front pages of magazines like Elle and Vogue’

PHRASES:
be in someone's good (or bad) graces
Be regarded by someone with favour (or disfavour).

there but for the grace of god (go i)
Used to acknowledge one's good fortune in avoiding another's mistake or misfortune.

with good (or bad) grace
In a willing and happy (or resentful and reluctant) manner. 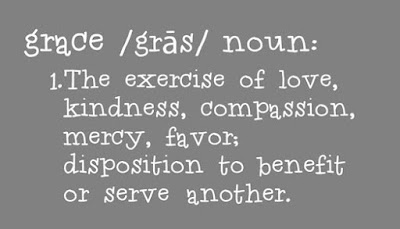 What's your one guiding word for 2017?
Posted by Brona Labels Meme, My One Word at 24.12.16
Email ThisBlogThis!Share to TwitterShare to FacebookShare to Pinterest