Our Man in Havana by Graham Greene 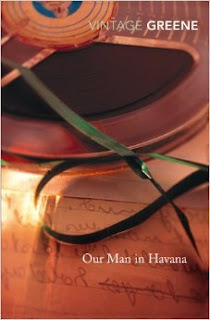 Our Man in Havana by Graham Greene was a great choice of book to read whilst travelling around Cuba although it was also a little bizarre.
In some ways nothing had changed since Greene wrote this in 1958 but on the other hand, everything had.

The other rather eerie side to this story, is that three months after publication, Fidel and his supporters stormed the city and ousted the very corrupt Batista regime. Although Our Man in Havana is not a revolutionary story there's something about the timing of this book that gives one the shivers. There are plenty of comments and observations that the future reader can see as signs of what is about to happen in Cuba.

The primary subject for ridicule in Greene's story was the ineptly bureaucratic British intelligence network - in other words, a spy spoof. Of course, this was all made possible thanks to the fact that Havana, under Batista's dictatorship, was a place 'where every vice was permissible and every trade possible.*'

Batista's corrupt regime and the Americans role in it do come in for their fair share of Greene's ridicule, but his focus was clearly on the whole spying caper.

I prefer my satire and irony to be on the subtle side (think Jane Austen, Charles Dickens & Mark Twain - when he's not being very obvious!)
This is not subtle.

There are some moments that produce wry chuckles, but unfortunately I never felt engaged with the characters. I enjoyed the mention of Cuban places and the descriptions of cities and venues that I had also seen for myself.

Tim Parks in the New York Review of Books said,

satire alludes to recognizable contemporary circumstances in a skewed and comic way so as to draw attention to their absurdity. There is mockery but with a noble motive: the desire to bring shame on some person or party behaving wrongly or ignorantly. Its raison d’ȇtre over the long term is to bring about change through ridicule; or if change is too grand an aspiration, we might say that it seeks to give us a fresh perspective on the absurdities and evils we live among, such that we are eager for change.


Since satire has this practical and pragmatic purpose, the criteria for assessing it are fairly simple: if it doesn’t point toward positive change, or encourage people to think in a more enlightened way, it has failed.


Was Greene successful in bring about change through this farce? Does one feel enlightened after reading Our Man in Havana?

I was amused and entertained, but sadly, I also felt that nothing about the secret services of the world had really changed. Just like Cuba, the raison d'etre behind all secret government agencies still feels stuck in 1958.

I'm not sure I would have enjoyed reading Our Man in Havana as much as I did, if I hadn't actually been in Cuba at the time.