Children of the New World by Alexander Weinstein

Speculative fiction is not usually my cup of tea, but I had heard interesting things about this debut author and his book of short stories.

This is part of the rave book blurb from goodreads - 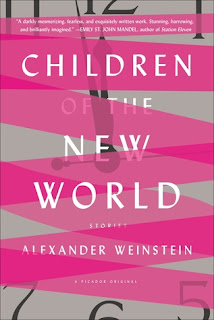 AN EXTRAORDINARILY RESONANT AND PROPHETIC COLLECTION OF SPECULATIVE SHORT FICTION FOR OUR TECH-SAVVY ERA BY DEBUT AUTHOR ALEXANDER WEINSTEIN.

Children of the New World introduces readers to a near-future world of social media implants, memory manufacturers, dangerously immersive virtual reality games, and alarmingly intuitive robots. Many of these characters live in a utopian future of instant connection and technological gratification that belies an unbridgeable human distance, while others inhabit a post-collapse landscape made primitive by disaster, which they must work to rebuild as we once did millennia ago.

Children of the New World grapples with our unease in this modern world and how our ever-growing dependence on new technologies has changed the shape of our society. Alexander Weinstein is a visionary new voice in speculative fiction for all of us who are fascinated by and terrified of what we might find on the horizon.


Could the book possibly live up to its hype?

I don't normally read this genre, so perhaps there are lots of books like this out there. Therefore this may be nothing new or remarkable. But for a speculative fiction novice, I found these stories extraordinary, startling and original.

The longer stories in the second half of the book worked best with the title story creating a very eerie and sombre mood as the joys and woes of having a data family in the 'New World' are explored. In fact, it was all of the stories that featured family life in the near future that had the most resonance for me. The impact on the children and their various possible reactions were the human element in this book full of new technologies and social media gone viral.

I enjoyed the little references that crossed over between some of the stories that provided a sense of a coherent, consistent world view.

If you're not sure if this book is for you, try out Saying Goodbye to Yang, Children of the New World, Migration, The Pyramid of the Ass, Openness or Ice Age. They're the ones that have continued to haunt me.
Posted by Brona Labels Climate Change, Dystopian, Environment, Futuristic, Science Fiction, Short Story, Speculative Fiction, Utopian at 24.2.17
Email ThisBlogThis!Share to TwitterShare to FacebookShare to Pinterest