The Fellowship - check in time.

The 25th March is Tolkien Reading Day which seemed like an auspicious day to host our latest check-in post. The theme for the 2017 TRD is Poetry and Songs in Tolkien's Fiction. Therefore I will start our #HLOTRreadalong2017 business with Bilbo's Walking Song,

The Road goes ever on and on,
Down from the door where it began.
Now far ahead the Road has gone,
And I must follow, if I can,
Pursuing it with eager feet,
Until it joins some larger way
Where many paths and errands meet.
And whither then? I cannot say.

How are you going with your journey through The Fellowship of the Ring?
Are you going on and on?
Or perhaps you cannot say!

Have you found your way to Rivendell yet? Or did you get stalled in The Shire? Perhaps the Black Riders scared you from the path? Or maybe Tom Bombadil bored you to tears with his hey now! merry dol's!

Are you one of those who has raced ahead impatient to find out what happens next? 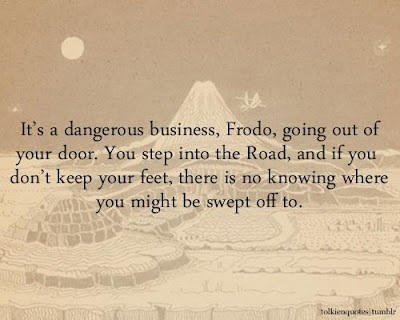 I confess that I am one of those readers who skim or skip the long poems in LOTR.
I was determined to read them this time round, which is partly why I have allowed generous reading times for each book. But I'm failing somewhat.

I happily read the smaller poems and songs, like Bilbo's walking song, but the 4 page epics are beyond me. I don't see the point of them and I'm just not that interested. 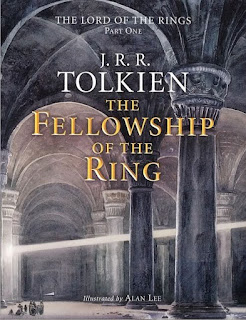 However Tolkien's ability to create a brand new world, complete with history, geography, myths and legends is very impressive. His descriptive passages are made to be read with the map alongside so that you can trace your finger over the paths, rivers and mountaintops that Frodo and his friends walk.

I have heard some people complain about how long it takes for the action to get going in LOTR, but I love our extended time in The Shire at the beginning. Meeting Bilbo again and getting to know Frodo and his friends has a lovely cosy, comfortable feel to it.

Bilbo's one hundred and eleventh birthday party is a lot of fun. The excitement, the excess, the humour. But even here, there is a sharp edge. Bilbo's sarcasm, Gandalf's growing concerns about events outside The Shire and the obvious power of the ring over Bilbo. 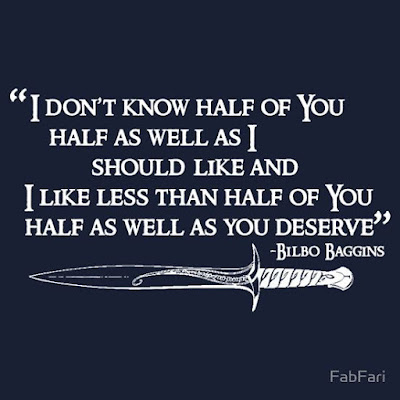 I was impressed to see that it was Tolkien who in fact coined the word 'tweens' in reference to hobbits in that irresponsible twenties phase between their childhood and coming of age at thirty-three.

Tolkien's usual foreshadowing techniques let us know that we should enjoy our warm, cosy time in The Shire as more dangerous times are fast approaching. Rumours of strange things happening, whispers and murmured hints reach our ears. Prepare, beware, watch out!

He uses words like strange, unwholesome, queer, dark, deadly, malice, revenge, enslaved, peril, torment, wretched and fear to great effect during these first few chapters. This time is clearly the calm before the storm. 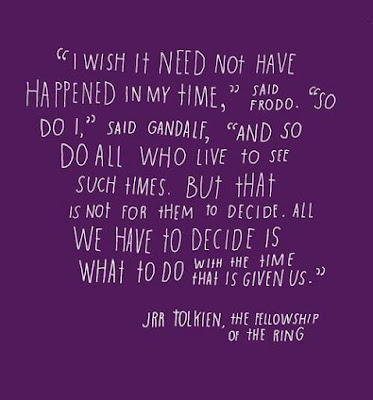 It takes a while for Frodo to get going though.
As much as the most avid fan may enjoy this time in The Shire, by the end we are urging Frodo on his way.

The casual passing of time that brings us to eve of Frodo's 50th birthday and the slow packing up and selling of Bag End almost feels irresponsible.
His last leisurely stroll though The Shire on the way to Crickhollow is not as dramatic or as dangerous as I remember from the movie. Tolkien allows Frodo a real sense of leave-taking.

The tension builds as the menace of the Black Riders is felt, but a couple of near-misses is all that we witness at this point. The danger still feels like it is out there somewhere.

I had forgotten all about Tom Bombadil (he was absent from the movie).
I'm not sure why he's in the story at all, except as one of Tolkien's safe havens from the increasing danger. And the danger is not just in the form of Black Riders. We must beware stone-wrights, old man willow and some of the more suspicious folk in Bree.

Tom Bombadil is not an important person – to the narrative. I suppose he has some importance as a 'comment'. I mean, I do not really write like that: he is just an invention (who first appeared in the Oxford Magazine about 1933), and he represents something that I feel important, though I would not be prepared to analyze the feeling precisely. I would not, however, have left him in, if he did not have some kind of function. I might put it this way. The story is cast in terms of a good side, and a bad side, beauty against ruthless ugliness, tyranny against kingship, moderated freedom with consent against compulsion that has long lost any object save mere power, and so on; but both sides in some degree, conservative or destructive, want a measure of control. but if you have, as it were taken 'a vow of poverty', renounced control, and take your delight in things for themselves without reference to yourself, watching, observing, and to some extent knowing, then the question of the rights and wrongs of power and control might become utterly meaningless to you, and the means of power quite valueless. It is a natural pacifist view, which always arises in the mind when there is a war. But the view of Rivendell seems to be that it is an excellent thing to have represented, but that there are in fact things with which it cannot cope; and upon which its existence nonetheless depends. Ultimately only the victory of the West will allow Bombadil to continue, or even to survive. Nothing would be left for him in the world of Sauron.

I hope you're enjoying your time in Middle Earth as much as I am.
I haven't had as much time as I originally hoped to write more regular posts with this book, but the main thing is to read with pleasure and fellowship. The blogging can take care of itself!

*The Letters of J R R Tolkien edited by Humphrey Carpenter and assisted by Christopher Tolkien 1981.