The Fellowship of the Ring - Welcome to Book

We now leave the gentle, innocence of The Hobbit behind as we head into darker, more dangerous times.

Sixty years have passed since we last saw Bilbo.

Tolkien fills us in on what has happened in that time and quickly foreshadows some of what's to come.

The link between The Hobbit and LOTR, is of course, the ring. You might like to reread the chapter about the finding of the ring in The Hobbit, called Riddles in the Dark before embarking on the next journey with Frodo, Sam, Pippin and Merry.

From the first, printer's errors and 'well-intentioned corrections' marred the publications of the various LOTR editions. Tolkien spent large parts of his later life attempting to rectify the mistakes. After his death in 1973, his son Christopher continued to provide and supervise corrections, including those made for my current edition of the book.

My current edition of The Fellowship of the Ring was published by Houghton Mifflin in 2002. It's a lovely, glossy hardback illustrated by Alan Lee (who went on to become one of the artistic consultants for Peter Jackson's movies).

A few interesting facts - Alan Lee made two cameo appearances in the movies of LOTR - one in the opening sequence of The Fellowship as one of the nine kings of men who became the Nazgûl, and two, in The Two Towers as a Rohan soldier in the armory (over the shoulder of Viggo Mortensen as Aragorn and Legolas talk in Elvish).

Tolkien began writing LOTR after finishing The Hobbit and before it was published. But the writing process took time. As Tolkien said in his foreword to the second edition,


the composition of Lord of the Rings went on at intervals during 1936 to 1949, a period in which I had many duties that I did not neglect, and many other interests as a learner and teacher that often absorbed me. The delay was, of course, also increased by the outbreak of war.... Then when the 'end' had at last been reached the whole story had to be revised, and indeed largely re-written backwards.

His desire was to simply tell a tale - a long story, that would 'amuse', 'delight', 'excite' and 'deeply move' his readers.

Tolkien also addressed the issue of inner meanings or messages in the LOTR in this foreword by clearly stating that he intended none whatsoever, "it is neither allegorical nor topical". He claimed that the most of the story had been conceived before the beginning of WWII so that "little or nothing in it was modified by the war."

I plan to reread the books over a leisurely period of time. I want to savour my illustrated editions and feel no pressure to be finished by a set date. My reading time frames are generous but also designed to keep things ticking along.


My plans for the #HLOTRreadalong2017 will be to: 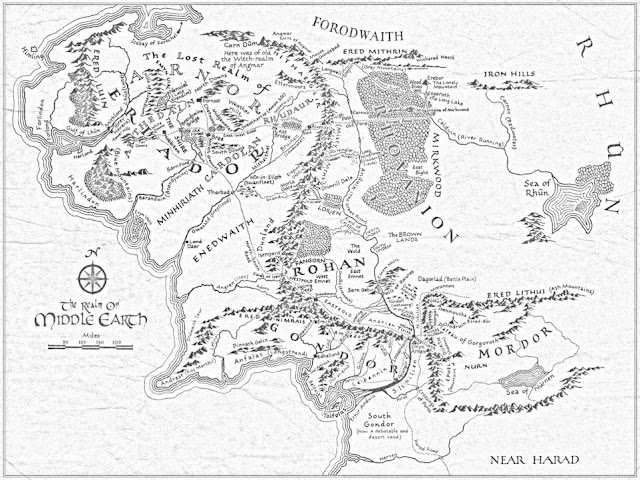 If you'd like to join in the LOTR section of the readalong, please feel free to write an introductory post heralding your intentions and share in the linky below. You can find all our posts about The Hobbit readalong here.

Tell us your history with Tolkien and the LOTR.
Why are you reading or rereading it now?
Have you learnt Elvish? Or read any other Tolkien books?

If you are rereading and would like to mention specific events that happen in the book, please remember to add **spoiler** alerts to protect the innocence of any first time readers.