Offshore: Behind the Wire on Manus and Nauru by Madeline Gleeson

I have no idea how to adequately review Offshore: Behind the Wire on Manus and Nauru.

Refugees, asylum seekers and offshore processing has polarised politics and opinion in Australia for several years now. A book like this, that attempts to provide an 'uncompromising' overview that 'gets behind the rumours and allegations to reveal what is known' will probably only be read by those already convinced that there has to be a better way to manage the perceived crisis in asylum seekers. 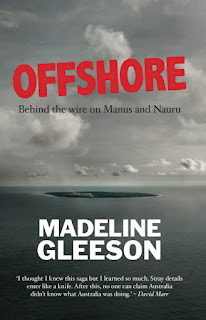 Gleeson has put together a thoughtful, cohesive and detailed document. Her anger and frustration at the living conditions on Manus and Nauru and the uncertainty around processing individual claims is palpable. Yet Offshore still offers the reader opposing ideas, contradictory evidence and controversial opinions in an attempt to provide a balanced argument.

However it was impossible for me to get to the end of this book without being appalled by the conditions that the asylum seekers are currently living in on Manus and Nauru. The only justification for this treatment appears to be the idea that it will act as a strong deterrent for anyone considering arriving in Australia by boat.

Given that so many of the world's governments seem to be in a race to head to the right, I'm not sure how or when this situation will ease. After reading about the amount of money our government has spent and continues to spend on maintaining Manus and Nauru, the problem is not the money.

The problem seems to be how we actually perceive asylum seekers and refugees. Currently our ability to perceive, know or understand all the reasons why this situation has occurred are shrouded in double speak and political obfuscation. This ignorance creates fear and distrust.

Morally and ethically we know what should be done, so why aren't we doing it? What is the political expediency that is driving our current course of action? Why are we deliberately creating more damage for people already damaged? What will the long term cost for this psychological damage be? For them and for us? How can we possibly think that it will end well for any of us to create this level of trauma in human beings?

My only problem with Gleeson's book is that none of these questions could be answered.

Future history students will one day be studying this period of time and citing these events as one of the causes for what happens next. They will shake their heads in wonder that we couldn't see and didn't do anything to change the course of history.

It would seem, that history does indeed, repeat itself.

James Kane from Goodreads has posted the review for Offshore that I wish I could have written.

Offshore was longlisted for this year's Stella Prize, shortlisted for the University of Queensland Non-fiction award 2016 and winner of the Victorian Premier’s Literary Award for Writing for Non-fiction 2017.