Out of Africa by Karen Blixen

Out of Africa by Karen Blixen has been my nemesis for quite a long time now. I've tried to read it several times after seeing and enjoying the movie back in 1985, but it baulked me at every attempt. I found the language stilted and dry and too descriptive. 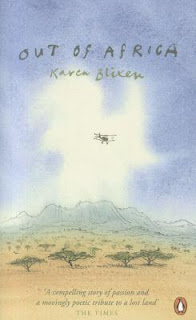 Thirty years later it finally proved different. I wasn't put off by the old-fashioned language or writing style.

Occasionally the language still jarred my modern ears and eyes, but Blixen was obviously in sympathy with and empathetic towards the local people of Kenya.


The discovery of the dark races was to me a magnificent enlargement of all my world.


We ourselves, in boots, and in our constant great hurry, often jar with the landscape. The Natives are in accordance with it.


Certain stories and sections were beautifully wrought with Blixen bringing the reader right into her world. The first three sections were full of interesting and unique stories. Lulu the gazelle, local customs, tribal justice and tales about many of her servants provided the reader with an insider's view of a world that most of us will never be able to experience. Not only because that time in history has now passed but simply because most of us live out our lives not far from the place or culture of our birth.

An African forest is a mysterious region. You ride into the depths of an old tapestry, in places faded and in others darkened with age, but marvellously rich in green shades. You cannot see the sky at all in there, but the sunlight plays in many strange ways, falling through the foliage. The grey fungus, like long drooping beards, on the trees, and the creepers hanging down everywhere, give a secretive, recondite air to the native forest. I used to ride here with Farah on Sundays, when there was nothing to do on the farm.


The sense of adventure, curiosity and drive that makes someone leave their home, to explore another country completely different to their own and to embrace what they find there is not something that many people do voluntarily. Blixen was obviously an unconventional woman. Her independence and pioneering spirit would have been unusual in her time. She must have faced censure and disapproval at every step.

In Donald Hannah's biography, The Mask and the Reality (1971), she is quoted as saying,


Here at long last one was in a position not to give a damn for all conventions, here was a new kind of freedom which until then one had only found in dreams!

Yet none of this is evident in her book.

All the emotion is sucked right out of it.
We don't get to know Blixen - what makes her tick, why she embarked on this adventure in the first place, what obstacles she faced, how she felt about anything. We also don't get to know Denys at all. He is just this guy who flies in and out at times. When he dies, you feel nothing. You have no sense of who he was or why he was important to Blixen.

Thanks to wikipedia I found out that she wrote a letter to her brother Thomas in 1924, where she said,

I believe that for all time and eternity I am bound to Denys, to love the ground he walks upon, to be happy beyond words when he is here, and to suffer worse than death many times when he leaves...

None of that feeling is portrayed in the book.

Perhaps my problem with Out of Africa was expectation.

I was expecting a cohesive story about her life and times in Kenya, instead it was simply a collection of anecdotes, observations and character sketches, strung together by Blixen at a later date. One whole section, called From an Immigrant's Notebook, was purely snippets of information loosely collected from a journal or letters - all the bits she didn't have the time or inclination to flesh out into longer stories perhaps.

Thanks to the 1985 movie, I was also expecting to get a sense of Karen and Denys' turbulent relationship. Obviously the movie combined various sources of information to round out the anecdotes from Out of Africa, as none of this was revealed in the book.

The insights into Kenyan life and culture were fascinating but Out of Africa is not a memoir or an autobiography. For me, this was disappointing and ultimately unsatisfying.

There is now a museum in Blixen's old home in Kenya.

Out of Africa fulfils several bookish challenges. It is