The Fall by Tristan Bancks

I read The Fall by Australian writer Tristan Bancks as one of my recent #readathon books. 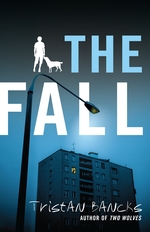 Bancks has been very successful with his previous book, Two Wolves (titled On the Run in the US), winning the KOALA & YABBA Children's Choice Book Awards in 2015 as well as being shortlisted for the CBCA and Australian Prime Minister's Literary Awards. I have been meaning to read it for two years now.

He also has a younger reader series called My Life about a boy called Tom Weekly who now has five books full of jokes, cartoons and 'other stuff he made up'.
I am not the target audience for these books, but the 9 year old boys in my life tell me that they are very funny and gross!

The Fall is aimed at a slightly older reader. It's a fast paced, easy to read thriller with gripping end of chapter cliffhangers. The prefect late in the day #readathon book!

I enjoyed the Alfred Hitchcock-esque Rear Window beginning, as young Sam overhears an argument, late one night, in the apartment above his dad's. Sam has had a recent knee operation and is still learning how to get around on his crutches. He hobbles over to the window to hear the argument better, when suddenly a body falls past his window.

What follows is pure Hitchcock - a missing body, break ins and a mysterious girl next door. Add in a dodgy dad, a suspicious police chief and oodles of near misses for non-stop thrills and spills.


The Fall is a June release for Penguin Random House Australia.