The Murderer's Ape by Jakob Wegelius

Sometimes the perfect book lands on your doorstep at exactly the right time.

This past month or so has been pretty ordinary. The loss of a much loved family member to cancer has left us all exhausted and numb. I'm sure many of you know the drill we've been through lately. The shock, followed by hope and a more positive outlook, then facing up to reality, one last hope - dashed, the waiting, the decline, the sadness and the final goodbye.

One of my solaces through all of this has been reading - I need to read - I just had to find the right book.

I needed something easy but engaging. I needed a riveting story with an abundance of heart and soul. I also needed some aesthetic pleasure.

My previous posts focused on all the books that didn't work for me during this period, but now let me share with you the delightful, charming story that did provide comfort and joy.

The Murderer's Ape by Swedish writer Jakob Wegelius gave me all of the above and more. 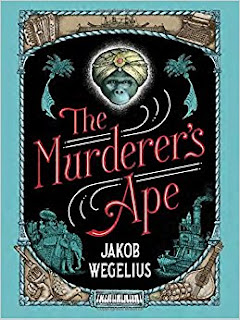 Wegelius has created a classically told story full of friendship, courage, kindness, determination and loyalty. Sally Jones is a gorilla - yes, a gorilla - who is smart, thoughtful and very talented, but she cannot speak. However Sally Jones can write a little and at the start of this story she learns to type on a 1908 Underwood No. 5 typewriter.

By the end of the first page I completely believed the premise of this tale and having a gorilla as the protagonist seemed perfectly natural. Sally Jones has a captivating voice and an amazing tale to tell.

The Murderer's Ape is an adventure wrapped up in a mystery with a quest that takes us around the world. From Lisbon to India and back again this story meanders along at a leisurely, thoughtful pace, gradually revealing little nuggets of insight and information.

Wegelius has drawn numerous pen and ink illustrations for each chapter. Seventeen full page character profiles also grace the beginning of the book. 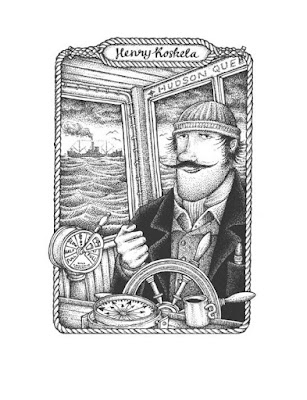 
The Murderer’s Ape injects a new lease of life into the classic adventure story. Along with a gorilla named Sally Jones, the reader visits the run-down docks of Lisbon, embarks on dizzying journeys across the seven seas, and calls on the Maharaja of Bhapur’s magnificent court – all in an attempt to clear the name of Sally’s best friend, the sailor Henry Koskela. Through his love of narrative and fine knack for portraying character, the author brings early-20th-century history to life, with a particularly keen and curious eye for the new-fangled technology of the day. Detailed portraits and vignettes, as well as maps that chart Sally’s adventures, make this a book that is as visual as it is literary.


Originally published in 2014 and now translated into English by Peter Graves, Wegelius has created an instant classic with this beautifully written, sumptuously produced and generously illustrated novel for thoughtful 12+ readers.