The Return of the King, Book V by J R R Tolkien

I raced through Book V (The War of the Ring) so quickly because I could not literally put the book down. I knew what was going to happen next, but I wanted to be there and experience it all again! I love how being fully immersed in this world makes me feel. 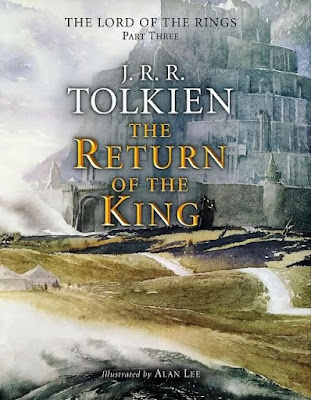 In some ways I was reading this for the first time though.

My previous reads had been racy, breathless reads to find out what happened next to our four beloved Hobbits. I didn't linger over the descriptions of the buildings or meander through the more scenic sections, like I did this time. Having Alan Lee's full page illustrations to pour over at regular intervals helped my stunted imagination a lot. I could trace their journey or pick out details that Tolkien referred to thanks to Lee's meticulous drawings.

I even read all of the battle scenes for the first time with care and due diligence.

I discovered so many small comments and gentle observations with this reread,


For the Tower of Ecthelion, standing high within the topmost wall, shone out against the sky, glimmering like a spike of pearl and silver, tall and fair and shapely, and its pinnacle glittered as if it were wrought of crystals; and white banners broke and fluttered from the battlements in the morning breeze, and high and far he heard a clear ringing as of silver trumpets.

I love this section for the growth and maturity that we see in Merry and Pippin in particular. At the beginning we see them as being a tad silly and foolish. But now they have faced danger and battle together and for the first time they are separated as Pippin is raced off to Minas Tirith by Gandalf.

We realise how much Pippin has matured when we see him through the eyes of strangers - Denethor 'I see that strange tales are woven about you.'
- Beregond 'you have endured perils and seen marvels that few of our greybeards could boast of.'

We also get a Tolkien clue about where things are up to for Frodo (and Sam) when Pippin,


wondered where Frodo was, and if he was already in Mordor, or if he was dead; and he did not know that Frodo from far away looked on that same moon as it set beyond Gondor ere the coming of the day.


Via Pippin and his brush with a Nazgul, we're also reminded of Tolkien's religious beliefs -


'No, my heart will not yet despair. Gandalf fell and has returned and is with us. We may stand, if only on one leg, or at least to be left still upon our knees.'


Gandalf finishes this chapter with ominous words, 'The Darkness has begun. There will be no dawn.'
before passing the story telling baton back to Merry and his journey with the Riders of Rohan.

Merry's kindly, generous, father/son like relationship with Theoden brings into stark contrast Pippin's experience with Denethor. Pippin offers his service to Denethor 'for pride stirred strangely within him, still stung by the scorn and suspicion in the cold voice' as a 'payment' of his debt to Boromir for saving his life at the expense of his own. While Merry is moved to service by 'love for this old man'.

Either way, these two Hobbits and their sense of duty and fealty to a cause bigger than they could have ever imagined, is inspiring and a little misty-eyed at the same time.

Aragorn and the Shadow Host scenes were pretty creepy and unfamiliar to me. I have a vague recollection of this scene in the movie, but for their entire journey through the mountains, I felt like I was in a new-to-me story. Like Gimli, my sense of time got seriously waylaid here. It was only at the end of the chapter that Tolkien reminded us of the time frame, 'but the next day there came no dawn, and the Grey Company passed on into the darkness of the Storm of Mordor'. 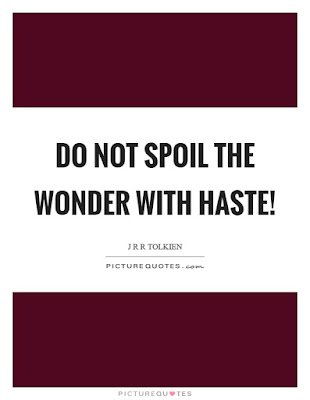 In previous reads, the next two chapters were usually given short shift by younger me. I wanted to get to the action - I wanted Merry and Pippin to meet up again. All that riding and fortifying and waiting drove me crazy!

However, this time around I enjoyed the anticipation and the slow build. So much so, that at the end of the siege of Gondor, I trumpeted out loud (much to the bemusement of a sleepy Mr Books) 'Rohan had come at last!' and hugged the book to my chest.

The battle scenes were heroic and desperate, as one would expect of any fictional battle scene, but what I noticed this time around was that Tolkien then gives plenty of time to the after effects of such a big battle. He shows us the field strewn with the dead and dying. We feel the pain of the injured - and not just the physical pain but the psychological pain as well. Denethor's failure of character at this time, as he gives into despair, reminds us that even those on the side of good can fall into dark ways.

We finish Book V with a battle plan. Our friends (isn't it lovely to have them all back together again?) realise they are out-numbered and out-gunned by those on the side of Mordor, so they plan a sleight of hand, in the hope that Frodo will be able to follow through with his plan, which has the potential to save them all, while Sauron is distracted by them at the Black Gate.

However, things look pretty hopeless at this point. The fellowship fear for Frodo and Sam's safety after hearing about the path they have chosen, and we already know what danger has actually befallen the pair. We, the reader, know that things are even bleaker than the fellowship fear.

I always thought that The Two Towers was my favourite of the trilogy but after this, I can safely say that Book V is now my favourite part of the story.

Will Book VI be able to keep this momentum going?

I leave you, tonight, with a quote from one of Tolkien's letters.


I am in fact a Hobbit (in all but size). I like gardens, trees and unmechanized farmlands; I smoke a pipe, and like good plain food (unrefrigerated), but detest French cooking; I like, and even dare to wear in these dull days, ornamental waistcoats. I am fond of mushrooms (out of a field); have a very simple sense of humour (which even my appreciative critics find tiresome); I go to bed late and get up late (when possible). I do not travel much. I love Wales (what is left of it, when mines, and the even more ghastly sea-side resorts, have done their worst), and especially the Welsh language.

The Fellowship of the Ring

The Return of the King