The Salzburg Tales by Christina Stead

*** I started this review last year.
I read the majority of the book (three quarters to be precise),
before abandoning it (as revealed in this more recent post).

I held off posting this until I had finished the book.
That ain't gonna happen now, so here are my thoughts up until pg 284! *** 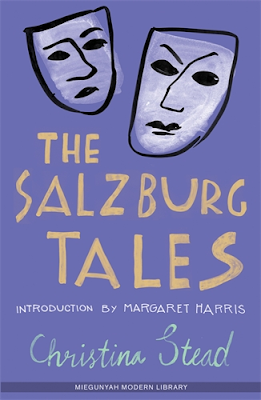 I knew straight away that The Salzburg Tales by Christina Stead would be one of those books that demanded more of my attention than I had been used to giving of late.

After several false starts, I sat down one Saturday morning with a cup of tea and a pencil in hand, determined to find my way in.

Careful reading and judicious underlining slowly brought the threads together as I made my way through the Prologue which gave us our sense of time and place, through to The Personages, where Stead introduced us to her storytellers.

Like The Canterbury Tales, her characters are labelled, so that we have The Festival Director, The Viennese Conductor, The Italian Singer, a French Woman, a Doctress, an English Gentleman, a School Teacher, The Poet, a School Girl, A Lawyer and The Philosopher, just to name a few.

And like The Caterbury Tales, Stead set out to write a fairly traditional 'frame tale', whereby one story leads onto the next story and the next, almost like a nesting doll of tales sitting one inside the other.

Frame stories are often organized as a gathering of people in one place for the exchange of stories. Each character tells his or her tale, and the frame tale progresses in that manner. (wikipedia)


Margaret Harris' Introduction in my edition, also prepared me for Stead's use of The Salzburg Tales as a 'spectacular demonstration of her storytelling virtuosity, across an array of narrative genres that includes, according to her, 'the sketch, the anecdote, jokes cunning, philosophical, and biting, legends and fragments.'

Harris claimed the the stories could be read randomly and that they included the 'uncanny, fantastic, morbid, ghostly, lighthearted; tales from various tradition, others that are startlingly original; some neatly resolves narratives, others enigmatic.'

The Salzburg Tales included all of that and more.

I enjoyed some of the stories and some of the storytellers more than others. I constantly referred back to The Personages chapter to see if I could make any link between the storyteller's bio and the type of story they told. Sometimes I could, and sometimes I was left scratching my head, perplexed. Sometimes one story feed into the next, but most of the time they didn't.

Stead obviously enjoyed the intellectual exercise that is The Salzburg Tales. I was able to detect versions of well-known fairytales, classical myths and legends and gothic stories not unlike Poe. She was also apparently influenced by Chekhov, Gogol, Balzac, Maupassant, Hoffman & Hawthorne, but as I am not familiar enough with any of these writers, I failed to make the connections.

The thing I missed most whilst reading this book though, was character development.

I realised that I much prefer books with interesting, engaging, evolving characters. Characters that I can get inside of who have complex, nuanced behaviours. I want to be able to walk around in their skin for a while; to see things from another perspective.

Stead's Tales provided entertainment to my intellectual self, but most of them failed to touch my heart or soul.

The Salzburg Tales were first published in 1934. It was Stead's first published book. The Miegunyah Press produced this new edition in 2016 with an introduction by Margaret Harris, Challis Professor of English Literature Emerita at the University of Sydney, and literary executor for Christina Stead.