Unfortunately this is my second post this year detailing books that I did not finish for one reason or another. I still have several half-read books languishing by my bed, but I really do plan to finish them one day, it's just that other stuff has got in the way!

When I'm deciding which book to read next, I search for something that I think might appeal to my current mood or frame of mind. I then try the first page.

I cannot begin to tell you how many books never get to go any further. I really do judge an entire book by it's ability to hook me on page one.

However, once I get past this little hurdle, I'm usually prepared to commit to reading the whole book.

I'm not sure if I'm getting fussier as I get older, but I seem to be more willing to abandon books at various stages of being read. Once a book or an author has lost my interest or my care factor, it can be very difficult for me to continue.

Believe it or not, goodreads has helped me decide which ones to abandon and which ones to persevere with. I normally save review reading until I've finished the book (& written my own response), but with those books that I'm feeling unsure about, I now check what others have thought.

I abandoned The Goldfinch a few years ago and still don't regret it. More recently, I was reading The Vanishing Futurist and began to struggle a little with some elements of the story. I checked goodreads and enough of the reviews there convinced me to continue. And I'm glad I did. It was a fascinating story, with a few reservations.

However three books are now officially relegated to the DNF pile. The Patriots by Sana Krasikov failed to excite me at all, despite sounding so very promising. Many of my goodreads friends expressed their concerns about exactly what I was struggling with...so I felt comfortable about letting it go.

Did not finish after 53 pgs and reading several reviews on here that had the same problems I did - it was boring, it told rather than showed, an annoying unconvincing protagonist, some lovely phrases & sentences at times but uneven.


The Easy Way Out by Steven Amsterdam was a special case. I had planned to finish it. There was enough there to keep me going, but bookclub got in the way. I was about three quarters of the way through when I went along to my first bookclub meeting with a new group. The discussion was lively and interesting and quite personal as you would expect with a book about euthanasia. 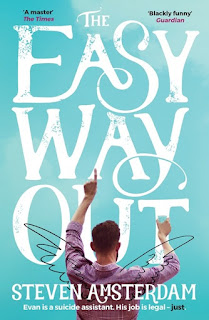 It was a book that was well written and topical but not particularly riveting reading. I didn't particularly like the main character, Evan, but it was interesting seeing the issue from a nurses point of view.

My family as well as everyone at bookclub were very clearly on the side of voluntary euthanasia. It seems like a black and white issue when you talk to most people. The book, however, was very good at highlighting the complexities and nuances of the debate. Yes, the person dying a painful, drawn-out death may wish to exit that pain and misery, but there are medical staff who have to actually do it and clean up afterwards. There are family members who may be on board with the idea early on, but when it actually comes time to let go, they find that it's so much harder than they thought. And there are medical, religious and legal ideas that muddy the waters even further.

We also discussed why it didn't make the shortlist for the Miles Franklin Literary Award. Most of were confused about the books setting - was it Australia or America? It felt like it was happening a few years in the future, but in a city that could be anywhere. Which helped to make the story more universal, but also meant that it was only just eligible to be considered for the Miles Franklin as it didn't really present 'Australian life in any of its phases'. I guess you could say the topical nature of the euthanasia debate is a phase of Australian life that is currently en trend, but it was disconcerting to have no idea where I was the whole time I was reading the book.

Now that I know how the book ends (thanks to the bookclub discussion) I'm ready to move on from this topic.

My final DNF for now was The Last Man in Europe by Dennis Glover. 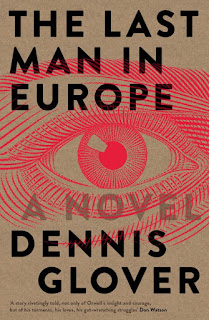 I was really looking forward to it. I love fictionalised biography and I had seen a recent production of 1984, so it felt fresh in my mind and felt like good timing.

But I struggled with the writing right from the start. It was dull and felt like Glover was trying too hard. Goodreads revealed a whole stack of other reviewers who felt the same.

Yes, some also raved about how much they loved the book, so I tried one more time. However, the scene in the mine was my point of no return. After reading, a number of years ago, Zola's amazing description of entering a mine for the first time in Germinal, it will be very hard for any writer to deliver anything more evocative or descriptive. But it can be done (Meg McKinley did so recently in A Single Stone), unfortunately, Glover did not, or could not.

It felt like there were one too many authors in this book.

I've just added another book to my DBF pile and one of the reasons I've decided to abandon is above, it seemed logical to add it on.

I have been eagerly looking forward to Alex Miller's newest novel all year. I've adored some of his earlier work, so I had high expectations. The Passage of Love (Allen & Unwin, Nov 2017 ) is also being billed as a fictionalised account of his own story - a genre I usually enjoy. 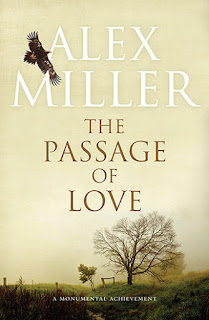 On the back of my ARC it says,


filled with wry humour, incisive observation and rare wisdom, Miller brilliantly solves the challenge of merging memoir and the novel.... The novel is a monumental achievement by one of our greatest writers.


I confess that all those exuberant adjectives had me a little worried (and I've only shown you one small section of the blurb)!

I was doing okay with the early first person section of the story, where Miller revealed his writers block and existential angst. But then he switched to third person and I began to struggle. The writing was very simple and unemotional - disengaging, dare I say. Every time he wrote the name Robert, I felt annoyed beyond all reason and logic.

I turned to goodreads for help, but the two reviews on offer left me wondering if I was reading the same book. So I turned to my work options.

Books + Publishing is a subscription based industry site for booksellers and other interested parties. I cannot legally copy the reviews posted by my fellow booksellers, but the review for The Passage of the Love, convinced me it was time to abandon ship. The issues I was having with the writing obviously continued the whole way through (the reviewer compared it to the minimalist writing style of Albert Camus in The Strangers) and the final straw for me was the 'if you liked....., then you will like this.'

This being Dennis Glover's The Last Man in Europe.

Have you read any of these books all the way through?
Have you abandoned any books recently or are you like Mr Books, who doggedly slogs his way through every book he starts, just in case it has a good ending?
Posted by Brona Labels DNF at 17.9.17
Email ThisBlogThis!Share to TwitterShare to FacebookShare to Pinterest