Neon Pilgrim: A Memoir of Walking Japan's Henro Michi seemed to be designed to appeal just to me right now, being in the middle of holiday preparations for Japan, as I am. Not that I'm planning to walk around any of the 88 Temples in Shikoku or run away for two months to find myself, as tempting as both options might sound at times! 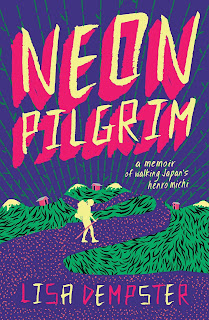 Neon Pilgrim is a travelogue and a memoir in one. Wikipedia defines a memoir as:

"a story from a life", such as touchstone events and turning points from the author's life.


This is what Dempster has presented us with - a moment from her life that proved to be a major turning point for her. It also happens to be a very engaging, easy to read account of her time walking the 88 Temple pilgrimage in Shikoku, Japan.

We don't learn a lot about Dempster's back story. We know she is twenty-something with some issues - depression, no job, over weight and living back at home. Back in her school days, she completed a year long exchange program with a school in Shikoku. She became aware of the 88 Temple pilgrimage at this time. In her time of need a decade later, it came back to her as a way of solving all her present day problems.

We don't really understand how Dempster got to this point in her life. But I guess we don't really need to know. The point for us, as well as Dempster, is the walk, the pilgrimage, the experience.

It was obviously a hard slog for Dempster - a real physical and mental challenge. Walking in the middle of the Japanese summer may not have been the wisest decision she ever made, but sometimes when you need to make a major change, you just need to get started, obstacles be damned!

Part of the tradition of the henro michi is gift-giving - offerings or settai. By giving drinks, food, shelter, lifts or clothes to the pilgrims, settai offerers are honouring the monk Kobo Daishi as well as those who walk in his footsteps. It can be seen as their way of participating in the pilgrimage themselves and acknowledging the importance of the pilgrimage in general.

For Dempster, the settai giving, and on her behalf, the accepting, played a significant role in her experience. The help was often timely and much needed. It took her quite a while to accept the generosity generously, but as with most things associated with the pilgrimage, there was a ritual to smooth the way.

It's possible to be a part of the 88 Temple pilgrimage in various ways. You can be a henro, pilgrim who walks the entire route with your backpack and sleeping gear on your back, sleeping wild or in the various small shelters along the way. Some people cycle the route, or drive themselves around or join in a bus group. Some henro's walk the distance but stay in B7B's or hotels. Some people do the walk in stages throughout a lifetime, while some have walked it hundreds of times already. A few do it in reverse.

Dempster went the whole hog, sleeping out or in tsuyado, the free shelters scattered along the route. It was considered unusual for a foreigner to do so, which made her an object of much fascination and discussion along the way. Obviously this was not the easy choice either. Wild animals, no toilets or showers and creepy crawlies in the middle of the night where just some of the hazards. Dempster was constantly facing her fears and challenging her self-doubts.


Her pilgrimage was also a time of great beauty, kindness and exhilaration. She had some glorious days and profound moments. She met some inspiring fellow walkers and found joy in things large and small. She also had some really shitty days where everything seemed to work against her - the weather, her body, her mind. Dangerous urban sprawl sections of the walk, over exuberant temple tourists, curt temple workers and unknown noises in the night were all part of the bad days.

I would have loved seeing some photos of the various temples, but I guess carrying a camera is not part of the pilgrimage experience.

The cover doesn't really do justice to this story and I never found out why she was a 'neon' pilgrim. Perhaps I missed that bit? But I found the story inspiring and fascinating. If I ever get to one of those desperate crossroads in my life or find myself stuck in a huge rut that can only be got out of by doing something drastic, then this will be the pilgrimage for me. Although I will walk and sleep comfortable in a cosy, warm B&B every night thank you!

Neon Pilgrim was originally published in 2009. This updated edition includes an Afterword by Dempster where she briefly detailed how much her life changed after completing her pilgrimage. She still had some dark times, but


the henro michi is a gift I can return to anytime, something to remind me that within myself I have the spirit and strength to get through anything.


In anticipation of #AusReadingMonth #NonFicNov