Aunts Up the Cross by Robin Dalton

I've had a lovely run of Text Classics during this year's #AusReadingMonth. It wasn't what I had planned though. Unexpected sad family news threw every plan and good intention out the window. As for reading matters, I fell back into the waiting arms of my comfort genre - classic/historical fiction. Text Classics softened the landing!

Aunts Up the Cross by Robin Dalton read like historical fiction (being set in Kings Cross, Sydney between the wars) but it was in fact a memoir. Perhaps because Dalton wrote the book in the 1960's, and was therefore looking back on her life from a bit of a distance, there were romantic, nostalgic, story-like elements to it. 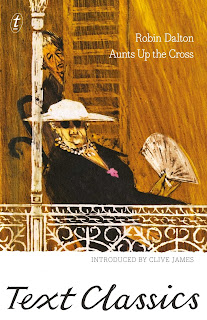 Dalton's childhood sounded fairly chaotic and madcap. A bevy of elderly aunts and uncles, a cast of weird and wonderful characters and some bizarre deaths. Her dad was the local GP which meant he had a nodding acquaintance with many of the eccentrics who lived in the area. A large number of these would turn up on the doorstep seeking treatment at all hours of the day and night.

Death was always present, cosily accepted, in my life.

In the large old house they all called home, strained relationships between the generations were the norm. Regular blow-ups kept everyone on their toes and oodles of passive-aggressive behaviour made for great storytelling, but must have been a nightmare to actually live with.

Looking back from the midst of my own ordinary adult life, it seems to me that a vein of quite extraordinary eventfulness enlivened the everyday existence of my mother's and father's lives and the lives of all my numerous great-aunts and -uncles and grandparents.

Sydney, itself, also became a larger-than-life character in Dalton's book. Her descriptions of Kings Cross, the buildings, local politics and the weather were evocative and realistic.

Our house was the only private residence in Kings Cross, the city's 'European' quarter - the 'Montmartre' of Sydney, people called it, with flattery and nostalgia. Actually, it was fairly hideous; like all of urban Sydney being a dusty hodgepodge of low-built builldings, all in need of a coat of paint-the upper halves flats and residential rooms and the lower halves shops, offices and cinemas. Between the two, cutting off the dirty stucco and dingy brickwork from the glaring neon signs, were the ubiquitous iron or concrete awnings, the characteristic features of Sydney's dim architecture. 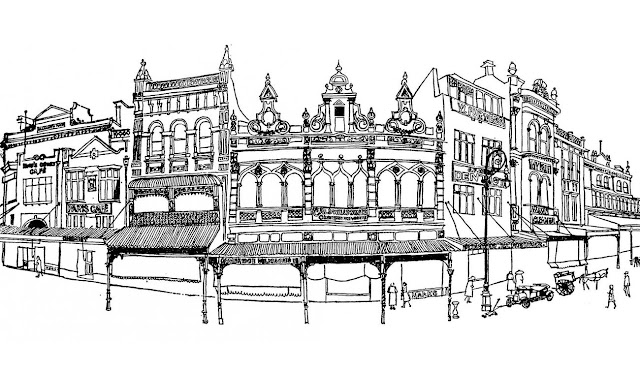 Dinah Dryhurst's black and white line drawings are scattered throughout the book adding interest and charm.

However, I confess that I found the level of eccentric behaviour and chaos exhausting by the end. I understand that Dalton was retelling her childhood stories for her own children after the early death of her husband, their father. Perhaps she was subconsciously trying to make a point or insert a life lesson that would help them accept the sudden change in their own lives, by showing that change and disruption is a normal part of all our life stories.

Compared to the modern day memoir where much navel-gazing and introspection is the norm. And where whole chapters are devoted to working out why people behaved the way they did or what flow on effects the childhood experiences may or may not have had, Dalton's memoir is, on one hand, delightfully free of such analysis, but on the other, lacking in the personal insight that can give a memoir universal meaning.

Aunts Up the Cross was a fun, rather bizarre romp through depression era Sydney. A delight to read but easily forgotten.