The Ladies of Missalonghi by Colleen McCullough

Regular followers of my blog will already know how much I love The Ladies of Missalonghi. It's not only a deliciously light, confectionery offering of a book, it's also a murky story mired down in a controversy involving plagiarism and L. M. Montgomery's The Blue Castle. A recent readalong for The Blue Castle was all the convincing I needed to not only reread it, but also to tack Missalonghi onto my #AusReadingMonth TBR pile.

The last time I read the books, TBC was read after TLOM, and The Ladies came out slightly ahead in personal preference, so I decided to reverse the order this time. And guess what? This time The Blue Castle was the preferred story. 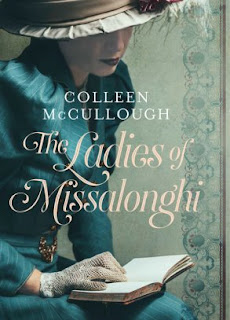 I love the setting of TLOM. The Blue Mountains is one of my favourite places in NSW, in fact, Mr Books and I were married 8 years ago on a Blue Mountains clifftop overlooking one of the beautiful valleys mentioned in the story. It's wildness and grand views are perfect for a BIG romance and the cool nights seem designed for snuggling up with a cosy book and someone you love. But I could be biased! (FYI - Byron is a fictional Blue Mountains village, but it could also be any of the gorgeous villages that do actually hug the line of the cliffs and the railway). 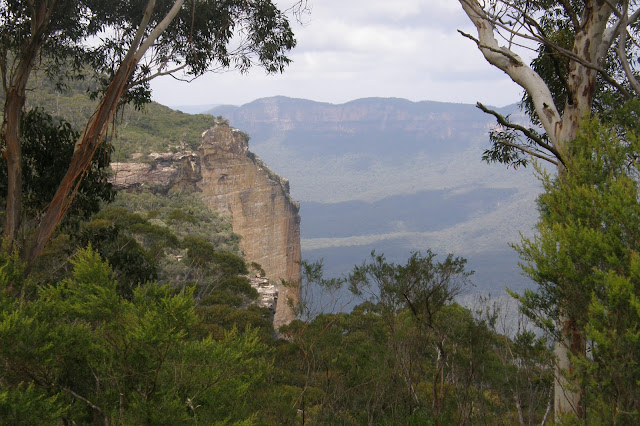 On winter mornings the valley was filled with brilliant white cloud that sat like milk below the level of the cliff tops, and suddenly as the sun increased in warmth it would lift up in a moment and vanish. Sometimes the cloud would come down from above, fingers seeking out the tree tops far below until it succeeded in covering them from sight under a spectral blanket. And as sunset approached, winter and summer, the cliffs began to take on deeper, richer colour, glowering rose-red, then crimson, and finally purple that faded into night's mysterious indigo. Most wonderful of all was the rare snow, when all the crags and outcrops of the clilffs were picked out in white, and the moving leafy trees shook off their powdering of icy moisture as fast as it fell upon them, unwilling to accept a touch so alien.


This is the mountains to a tee! 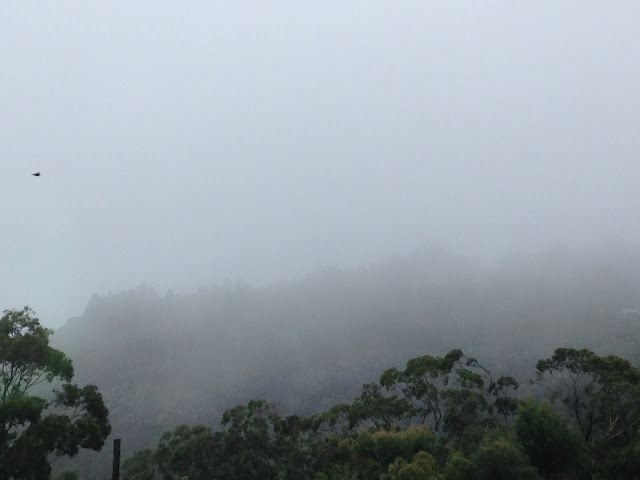 I also love that Missy's immediate family in TLOM are much kinder and more loving than poor Valancy's in TBC. Missy has grown up poor with a strict but loving mother. She knows what poverty and love  feels like. Poor Valancy only knows poverty.

Both novels can be seen as fairly classic examples of the romance genre - with a down trodden, plain heroine-to-be, a family that gets in her way/puts her down/hides her away, a mysterious, stranger hero-to-be, a misunderstanding that becomes the agent of change so that our 'to-be's' finally become fully fledged heroine and hero, in love and living happily ever after!

It has been suggested by some reviews I've read online, that McCullough's story is in fact a parody of the romance genre, but for a parody to work, there have to be clear signs for the reader to pick up on. Having read both books more than once, I couldn't find any evidence of parody or spoof, although McCullough does seem a little self-conscious at times.

The mystery in TLOM is more modern, and dare I say a more believable story (despite the ghost!) than Valancy's mere wondering about what on earth it is that Barney gets up to in his locked room. The satisfaction the reader gets when Missy's extended family get their comeuppance is far more thrilling than the mild pleasure we feel when we eventually discover what most readers have already worked out about who Barney really is and what he is doing.

As for the ghost in TLOM!
Where did that come from?
I don't think that McCullough gives the reader anywhere near enough clues and it isn't resolved very well, but it does inject a lovely bit of fairy tale-like magic into this romance. And it's the feel of this story that people respond to after all, not the logic.

The main thrill for readers of TBC is Valancy's blossoming. In true Cinderella style, Valancy overcomes parental and societal restrictions to finally come into her own and be happy in a life of her own choosing. She does it all by herself and we couldn't be prouder! Whereas Missy is guided and encouraged by Una to do the same.

The deception at the heart of both stories is one that Valancy also visited on herself. She is totally unaware that the doctor's letter was not meant for her. Whereas Missy sets out to deceive to get her man. And that's where TLOM loses a little of its charm, but gains some in moral complexity.

Did McCullough plagiarise The Blue Castle?
The jury still seems to be out on this.

Both Montgomery and McCullough are frequently associated with national stereotypes: as McCullough ruefully acknowledges, part of her problem seems to be that she has interfered with an author who is a ‘Canadian icon’. Montgomery’s writing is recognised as playing a major role in establishing one of the most persistent images of Canadians—as wholesome, vigorous, close to nature. On the other hand McCullough’s own brashness and sense of herself as a tall poppy under attack draw upon a stereotypically Australian set of images. The authors in play in this controversy, then, are recognisably national, if quite dissimilar.

McCullough always denied any plagiarism. However her theory that she was merely using the known tropes of romantic fiction doesn't really hold up either. There are just too many similarities.

I suspect the truth, as always, lies somewhere in the middle.

As an Anne fan, McCullough no doubt read The Blue Castle at some point in her childhood, but didn't remember doing so. Instead it stayed, tucked away, cosy and warm in her subconscious, until she was ready to write her very own fairy tale romance. The controversy doesn't diminish either story, and can actually be seen as a bonus. Thanks to the debate, both books have now been read by a much wider audience than what may have happened if they'd just been left to their own devices. I, for one, would never have discovered TBC if not for the controversy and I will always be grateful for that.

Both books are light, sweet, fluffy reads, just like a box of chocolate or a glass of bubbles! They're perfect in small doses or as a tonic to lift you out of the blues. And together, they are a splendid way to spend a rainy weekend, comparing and contrasting, til your heart's content!