The Plains by Gerald Murnane

What on earth am I going to say about you and this amazingly, stupendous, spectacular display of writing? How do you sum up or explain your experience with a book that pushes, exposes and plays around with so many ideas in one compact little piece of speculative writing? Where do you even begin to describe just how profound an effect it has had on you? And how delighted to have a discovered a new-to-me writer with at least another nine books to dive into?

The blurb on the back of my Text Classic says,


Gerald Murnane's The Plains tells the story of the families of the plains - obsessed with their land and history, their culture and mythology - and of the man who ventured into their world.


Okay, The Plains is that - on the very tip of the surface - but how to adequately describe the layers and depth?

Goodreads goes a little further with their synopsis,

On their vast estates, the landowning families of the plains have preserved a rich and distinctive culture. Obsessed with their own habitat and history, they hire artisans, writers and historians to record in minute detail every aspect of their lives, and the nature of their land. A young film-maker arrives on the plains, hoping to make his own contribution to the elaboration of this history. In a private library he begins to take notes for a film, and chooses the daughter of his patron for a leading role.

Twenty years later, he begins to tell his haunting story of life on the plains. As his story unfolds, the novel becomes, in the words of Murray Bail, 'a mirage of landscape, memory, love and literature itself'.


This brings us a little closer, thanks to the use of words like 'distinctive', 'minute detail', 'haunting' and 'mirage'. However, to really pin down the elusive, yet elaborate nature of this story will take a much better writer and thinker than moi!

Let's try Shannon Burns' 2015 article in the Sydney Review of Books, Gerald Murnane: An idiot in the Greek Sense:

I noticed the obvious things first: his sentences, above all else, were pristine; his tone was direct; his narrative control was stupefying; and he seemed to be writing about something that was at once totally unique to him and recognisably Australian. Over the following weeks and months Murnane’s other novels and collections of fiction – most of which were out of print and difficult to find at the time – revealed to me a local writer who could be mentioned in the same breath as literary greats (and eccentrics) like Marcel Proust, Virginia Woolf and Franz Kafka. Here was the kind of Australian writer I’d never dreamed of encountering, yet none of his books had received a major literary award.


The book is divided into three parts. The first part read like a parody of serious literature. It was quite funny at times, in a satirical way, as culture, philosophy, religion and love of nature were exposed and extolled in the same breath.


It was as though each plainsman chose to appear as a solitary inhabitant of a region that only he could explain.


The middle part was pretty dense with ideas and could almost be described as a monologue by Murnane through his characters. I'm not sure I understood what he was trying to do here. I wasn't sure whether to laugh or cry!


So I keep away nowadays from the volumes in which Time itslef is made to appear as one more sort of plain. I have no wish to be seen...as a man in sight of Time, the Invisible Plain, or approaching Time, the Plain Beyond Reach, or finding his way back from Time, the Pathless Plain, or even surrounded by Time, the Boundless Plain.


The last section seemed to sum up Murnane's ideas on seeing and perception, light and dark, memory and time. I felt like I had missed whole layers of thought and philosophy though, that where just within my grasp, but not quite knowable in the end.


I lifted my own camera to my face and stood with my eye pressed against the lens and my finger poised as if to expose to the film in its dark chamber the darkness that was the only visible sign of whatever I saw beyond myself.


See what I mean? 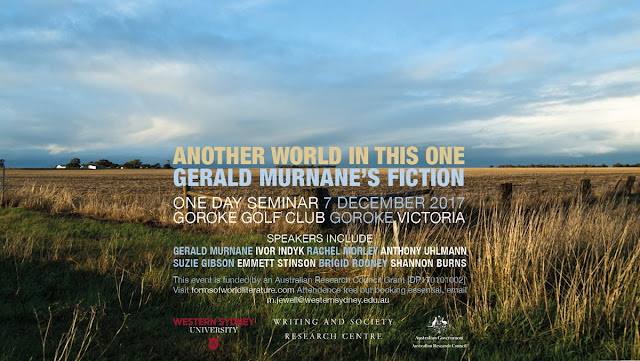 Intellectual, almost obtuse, experimental books can often leave me cold, but I found myself ridiculously excited by The Plains. There was something so compelling and captivating about the whole inner and outer Australian concept, that turns the way we see ourselves as Australians on its head. The incredible depth of detail that Murnane developed about this way of life and the people who populated this world - the plainsmen - who were so gob-smackingly self-absorbed, left me breathless. And bewildered.

A reread is definitely on the cards!